Home Buzz! 2010 Winter Olympics In Vancouver Is Daunting for the Film Industry

2010 Winter Olympics In Vancouver Is Daunting for the Film Industry

The 2010 Winter Olympics is in full swing in Vancouver and everyone is caught up by the fever of Olympian sport. Well, not everyone. A lot of filming usually goes on in Vancouver, but not during the Winter Olympics. The film industry is daunted by the monster that is the Games, they know they can’t compete when it comes to precedence right now, and it would be difficult to navigate the city while the Olympic traffic fills Vancouver to bursting. Transportation is definitely a nightmare, and logistics would become an even more Herculean feat than it would be in a game free zone. Imagine if the film crew needed an umbrella, where would they find one? They’d probably have to pry it from the fingers of a tourist or spectator. A daunting task indeed. But, if you’re planning on working the Games into the show, maybe the Games don’t appear too daunting. Or, if you need shots of a big crowd, filming the sports crazed tourists flooding the streets of Vancouver until way past my bedtime is the perfect answer for all your crowd shot needs. Or, if you want to do a documentary on protesters protesting protesters, Vancouver during the 2010 Winter Olympics is the place to be! Go Team Canada! Wooohoo! 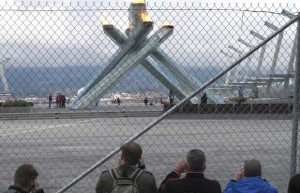 ~P.S.~ Look how close you can get to the Olympic Cauldron. Awesome. Only in Canada.