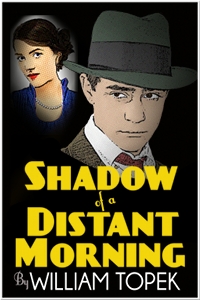 Shadow of a Distant Morning by William Topek

Shadow of a Distant Morning written by William Topek is a mesmerizing read. Written with a dry humor and a keen sense for keeping the suspense and action going, this is a detective novel that will have you wondering who dunnit, who has it, and who is playing who right up to the satisfying ending.

Devlin Caine is a private investigator making a living serving subpoenas and investigating questionable insurance claims in 1934 Kansas City. He’s a former Pinkerton agent and served as part of the Signal Corps in the war. He’s a stand up guy who analyzes everything, but in his line of work it just goes with the territory. Caine knows his way around the business and has a way of looking at life in general that can’t help but get you chuckling.

Affluent and successful business man Richard Graham sends Thomas Lundquist to Caine’s office looking to hire the private eye to investigate a potential business partner. Caine, against his better judgement, decides to take the lucrative job offer; despite the fact that the previous man on the job has turned up dead. However, from our intrepid gumshoe’s point of view, one week’s worth of work should be a breeze. Yet things aren’t as simple as Caine initially thought, and the original job soon morphs into an assignment to locate an item of interest, and act as a bodyguard for Graham’s daughter. Caine’s pretty ordinary life is about to take an extraordinary turn.

It isn’t long before Caine finds himself up to his neck in a world populated with gangsters, murder, threats of bodily harm, dirt naps, and the whims of the rich and powerful. He also finds himself falling hard for his boss’s daughter, Melinda Graham. As the body count rises and Caine realizes he might not make it out of this assignment alive, it is made abundantly clear that the item of interest is a very hot commodity.

This is a fast paced mystery thriller filled with more than its fair share of suspense, secrets, lies, subterfuge, manoeuvring, blackmail, intrigue, danger, and even romance. There are many twists and turns and nothing appears as it seems, and everyone it seems is after the same thing, which puts Caine in an awkward situation. Throw in his feelings for his boss’s daughter and we have ourselves a fine pickle. One thought became prevalent in my mind. How was Devlin Caine going to get himself out of this one alive?

The protagonist Devlin Caine is a likeable fellow, charming and possessed of a dry sense of humor and sharp wit. He has no small amount of boldness complete with a dash of reckless courage even. He demonstrates quite clearly that he is quite adept at pitting all sides against the middle and flying by the seat of his pants. He’s smart, and daring enough to make you worry about his well being as he goes for broke. He’s a character that has no problem playing a pretty high stakes game of cat and mouse with some dangerous players.

While reading this book, I felt a constant sense of the pressure Caine was feeling. There was a tangible increase in tension that kept me turning pages with an urgency to get to the end to finally find out if Caine succeeds. Well written, authentic, and with just enough historical tidbits to give its setting a rich tapestry feeling, this detective story definitely kept my interest piqued. It’s a book that has believable and not over the top, good old gumshoe narrative, some ominous characters, and a plot that will leave you guessing.

Shadow of a Distant Morning is available for download now at ireadiwrite Publishing.