Home Buzz! Clash of the Titans Is On!

Clash of the Titans Is On!

So, how stoked am I? Almost too stoked for words! Clash of the Titans is on! (As I mentioned in a previous post!) 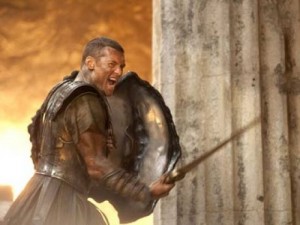 Sam Worthington_Clash of the Titans 2010_Flixster

Sam Worthington, who played the new and improved Terminator opposite Christian Bale (and who stole Mr. Bale’s thunder, I might add), is slated to play the legendary hero Perseus. Good choice! I say! And none other than the delectably villainous Ralph Fiennes (who plays the sinister and evil Voldemort with such panache and finesse in the Harry Potter franchise) is set to play Hades, while the epic Liam Neeson will portray none other than Zeus himself! There is also a complete pantheon of gods and goddesses in this movie, and a slew of mythical beasts, so this should be a surefire piece of entertainment. It’s in the hands of director Louis Leterrier, who directed Liv Tyler and Edward Norton in 2008’s Incredible Hulk, and Transporter 2. I loved the 1981 version of Clash of the Titans as a kid. It could very well be responsible for my love of Greek mythology. I can’t wait for the remake in 2010! Shades of Scorpius! and Great Zeus! and all that!

~P.S.~ Sam Worthington is also set to play the hero in James Cameron’s highly anticipated visionistic flick Avatar. A movie that is most definitely on my Movies To See List!