Home Buzz! Clash of the Titans Out on DVD Today!!

Clash of the Titans Out on DVD Today!! 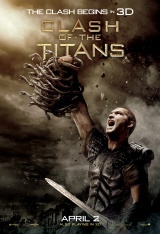 “Release the Kraken!” Oh, how I love it when Zeus says that. And yes, I have been accused of geekery every now and again, but believe me, there are far worse vices than love of mythology.

The Clash of the Titans reboot starring Sam Worthington as demigod Perseus, Liam Neeson as the mighty, philandering Zeus himself, Ralph “I love to play villains like Voldemort etc…” Fiennes as crusty old Hades, and last but not least, the gorgeous Gemma Arterton of Bond Girl fame as Io.

Blast from the past_Clash of the Titans 1981

I thoroughly enjoy men in skirts, and my DVD collection just would not be complete without the new and improved version of Clash of the Titans. I will place it right next to my old 1981 version. And for the record, I really enjoyed the remake. I thought it was slick and dazzling in all the right places. Despite the many nay sayers who liked to say, “BOO!”, I recommend it. You’ll learn a little about mythology if nothing else. And of course you’ll get to replay that line by Zeus, “Release the Kraken!” as many times as you want! Come on, admit it. You secretly love that line! I know I do!

Clash of the Titans is available practically everywhere today. Are you going to get a copy? Well, get Kraken! 😀