Loooooooong before Vanity Fair the magazine, there was Vanity Fair the book. This literary adventure was written in the 19th century (1847 – 48 to be exact) by William Makepeace Thackeray. He was a contemporary of Charles Dickens (who wrote such classics like The Adventures of Oliver Twist, The Life and Adventures of Nicholas Nickleby, A Tale of Two Cities, Great Expectations, (we loved the Gwyneth Paltrow, Ethan Hawke version by the way!),  A Christmas Carol, etc…). In 2004, Thackeray’s masterpiece was adapted for the silver screen starring the ever captivating Reese Witherspoon as the plucky heroine Becky Sharp. (Filmed while Reese was pregnant, but you’d never guess because the director was so creative.) 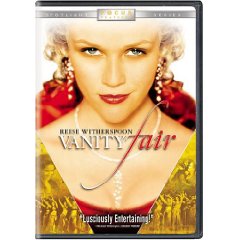 Now, Becky Sharp was very unhappy about her station in life to say the least. Never one to leave her fate and fortune in the avaricious hands of others, she determined to climb to the top of the social echelon. She is a truly audacious woman, yet charming for a rogue, and she desires nothing more than to prove that she is just as good as the duchess next door. Though Becky is a fictitious character, she is most memorable and truly extraordinary. In fact, Vanity Fair is one of my favorite movies. It juxtaposes the adages anything is possible and be careful what you wish for and all’s well that ends well. As a woman in the Victorian age of strict class and tight circles, she proves that one can be more than what society deems you should be. As a woman with no title, family alliances or money, she was faced with many, many obstacles and disadvantages, but our Becky took all this in her stride. (Might I add that despite her father being an artist, this prestige was unfortunately cancelled out due to the fact that her mother had been a singer, which was tantamount to saying she was a woman of questionable morals, if you know what I mean.) Through Becky Sharp’s ambitious eyes we can catch a glimpse of English elitism. We can also revel in Miss Sharp’s ruthless desire to hike to the highest rung of the social ladder by almost whatever means possible. This movie is definitely a fun filled romp and I highly recommend you watch it. It is filled with roguish high jinks and spunky, daring maneuvers, yet sweet and still possessed of a certain innocence and charm, and even grace. There are moral pitfalls around almost every corner and keen explorations into the complexity of human relationships. It left me feeling happy and thinking that it is indeed funny how life works sometimes and who and what we end up with when all is said and done. Sometimes because of the choices we make, sometimes because of fate, and sometimes because of luck.

~P.S.~ I wonder what Mr. Thackeray would have thought of this movie? I’m pretty sure he’d be pleased.