Five Actresses Who Would Portray Cleopatra Better Than Angelina Jolie 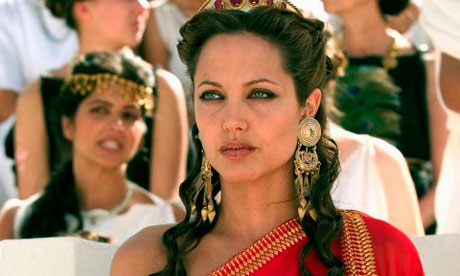 Angelina Jolie is an amazing actress, no doubt, but is she really the perfect Cleopatra?

Angelina Jolie As the Queen of the Nile? Is Hollywood in Denial?  The Following List of Actresses Would Be Better Suited for the Role

I’m a huge Angelina Jolie fan, have been for a very long time, and probably will be for some time to come. That being said, I think there are a BEVY of other beautiful and talented actresses who could portray Cleopatra Queen far better.  Word on the street is this movie is based on the book Cleopatra: A Life written by Pulitzer-prize winner Stacy Schiff.  I haven’t read it yet (and you haven’t either) because it isn’t even available until November 2010. Perhaps it will follow the belief that Cleopatra is descended from the Greek Macedonian, Ptolemy Soter, of the Ptolemy dynasty, and friend to Alexander the Great.

Imagine for a moment that this movie could be the very first Cleopatra biopic made by a major studio where an ethnic looking actress stars as the iconic, legendary and almost mythical Cleopatra. I have here a list of five actresses that I feel would be a better fit for the part. With one of these five actresses on board, all it would need is a stellar script and I could see this movie becoming a Hollywood blockbuster! [Read more…]