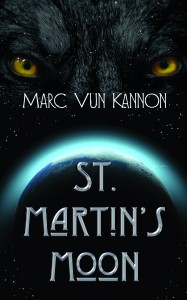 Werewolves on a lunar colony is a story premise I have never heard before. St. Martin’s Moon by Marc Vun Kannon is published by Echelon Press and grants a new twist to a legendary supernatural creature.

Major Joseph Marquand is Triple-S a.k.a. Special System Services. His specialty? Hunting werewolves. A surprise mission for the “lupe hunter” cuts short his vacation before it even begins. There’s been a werewolf attack on the moon. It’s his mission to get to the bottom of things and do what he does best. Plagued by haunting memories, Marquand arrives at the lunar colony Coventry Base and meets the alluring Candace. She’s the Head of Communications on the base and she makes it hard for Marquand to focus on his duties alone. She’s also a woman who can’t allow herself to get involved because she has secrets. Trying not to mix business with pleasure, Marquand sets himself to the task at hand, only to find that someone or something is watching him. Just who the mysterious observers are, Marquand can’t quite put his finger on. To make matters worse, not everyone is thrilled that he’s there. In fact, someone’s trying to kill him, and just who he can trust is difficult to discover. Marquand is in a fight for his life, haunted by a past that might have the power to destroy him or save him.

St. Martin’s Moon opens with quick action and I was hard pressed to keep pace. I kept wondering who the mysterious observers were, what they were doing, and what they wanted. I also started to wonder if Marquand was haunted or if some sort of strange space madness was afflicting him. I felt an unnerving sense of isolation as I read the story, and began to feel that Coventry Base was a place of exile and that no one was safe in space. That just be being in space one was in mortal danger. Through Vun Kannon’s writing style, I sensed that Coventry was a place unlike any other that harbored a huge and devastating secret. Before I was done reading St. Martin’s Moon, I like Marquand, began to question everything I knew about werewolves.

St. Martin’s Moon is a futurustic/paranormal hybrid that’s heavy on the future. Heavier than I’m used to reading, but promises to be satisfying for all the futuristic buffs out there as there is no end to the neat gadgets and the St. Martin’s Moon futuristic environment. Marc Vun Kannon has added an interesting element not only to the story idea of lycanthropes existing on the moon, but also to lycanthrope evolution. This is the future after all, and there is an inherent progression even for “supes” in Marc Vun Kannon’s universe. 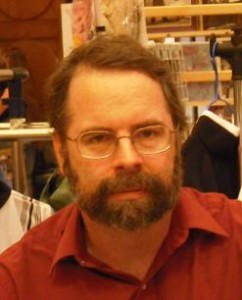 Marc Vun Kannon is the author of a myriad of books. Some of his titles include Unbinding the Stone and A Warrior Made, books one and two respectively in the Flame in the Bowl series. All titles are available for purchase now.