Home Books On Film Game of Thrones Recap: The Game So Far…

Game of Thrones Recap: The Game So Far… 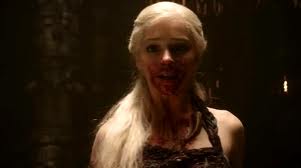 So, let’s do a quick recap on what’s going on so far…

Ned Stark is hot on the trail of what got Jon Arryn killed, and his suspicions about who killed Lord Jon have coalesced into stark realization. I’ve had a hunch for a while now that Joffrey is not Robert Baratheon’s son (he’s Jaime Lannister’s! GASP!) and Ned Stark knows this. So did Jon Arryn who was locating all of Robert’s bastards.

Cersei is up to her old tricks, and Joffrey suddenly making nice with silly Sansa is proof positive that something is afoot and it spells trouble for the Starks. Ned resigned as the Hand and Robert hired him again and left him to tend the throne.

Bran is riding jubilantly and confidently thanks to Tyrion’s saddle and had another attempt made on his life. Tyrion’s cleverness has got him out of a big scrape, and Catelyn’s sister is crazy. Benjen is missing, Jon Snow is faring well so far at the Night’s Watch and Jaime Lannister is on the lamb.

Ned has declared The Mountain attainted and has called Tywin Lannister to King’s Landing and Catelyn abduction of Tyrion has caused big problems. Arya’s taking sword lessons, and Ned was attacked and wounded by Jaime Lannister (which is why he’s on the lamb).

Daenerys’ brother finally got what was coming to him and Dany herself is the real dragon and also carrying Khal Drogo’s son and heir. Which makes Robert want to assassinate her.  Whew! And that’s the game so far. It’s really starting to heat up!

Episode 7 is entitled “You Win or You Die” and it’s on tonight on HBO. I can’t wait to see it. What about you?