Let Me In in theaters tomorrow!

The American version of the Swedish film Let the Right One In is in theaters tomorrow, but it isn’t quite what you might think. In fact, there seems to be a little bit of a difference of creative opinions between versions.

That’s right, they are making another version of the novel Let the Right One In by John Ajvide Lindqvist, but it isn’t an adaptation like the original movie, and it isn’t a remake of the original film. Confusing? Yes.

There will be a few adjustments, but the new movie will still have similarities to both the book and the first movie, and be available to a broader audience. It will also have a bigger budget, which means there will most likely be some amped up scary moments that were a little low key in the original movie most likely due to budget. But bigger doesn’t always mean better, and the first movie was pretty darn good if you ask me. 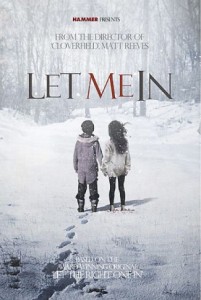 How far would you go to be a friend?

The story is about a bullied 12 year old boy who unwittingly makes friends with a girl vampire of seemingly the same age. Being a vampire though means she is actually quite a bit older. In my mind it brings into question the ethos of creating a child vampire, and is vaguely reminiscent of the moral dilemma creating Claudia posed in another well known vampire flick you may have seen.

At first he is unaware of what she is, but soon comes to realize the truth about her and her nature. As is the way with children, there is a lack of guile and an innocence to their friendship. And of course, there are benefits to having a vampire for a friend. And with a vampire being around, you can count on the fact that there will be casualties.

The state of innocence and the horrific existence of the damned are juxtaposed in this story, both bittersweet and horrendous all at once. Will Matt Reeves be able to capture that? I’ll give him a chance. 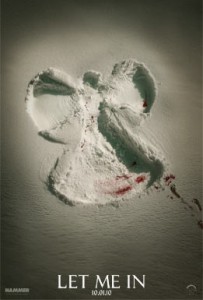 The original Swedish film, Let the Right One In, was directed by Tomas Alfredson. The American version is directed by Matt Reeves ( the director of Cloverfield and Felicity writer). Let Me In hits theaters tomorrow. Whatever happens, it has been promised that this film will be different. Worth seeing? Most likely.