Home Be Curious A Little Trivia For Ya Lucas McNelly’s A Year Without Rent Sounds Like a Great Idea!

Lucas McNelly’s A Year Without Rent Sounds Like a Great Idea! 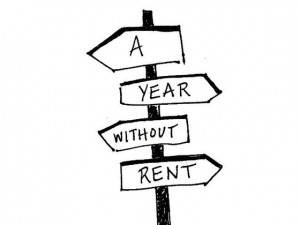 Lucas McNelly is going A Year Without Rent!

So, unless you’ve been kicking back under a rock, you’ve heard the buzz about Lucas McNelly‘s latest project A Year Without Rent. Sounds like a great idea, yeah? Of course it does! This is a daring undertaking, but the creator of indie films like L’attente (2006), Gravida (2007), Blanc de blanc (2009), and the upcoming Up Country (2011), has no qualms about the daunting task.

Recently, McNelly enjoyed the success of surpassing his goal in the raising of funds for A Year Without Rent on the indie friendly Kickstarter. I, like countless others, became inspired enough by the project to get on board. The A Year Without Rent project is McNelly asking, “Just how mobile does our digital lifestyle make us?” Intrigued by the concept of McNelly’s latest endeavor, I reached out to him, and he kindly agreed to let me ask him a few clever questions. Here are his clever answers! And as an added treat, McNelly also sent a link for some stills for his upcoming film Up Country. Enjoy!

TSD: What event or series of events inspired you to do this project?

McNelly: The genesis really comes from this summer when I was filming my upcoming feature film UP COUNTRY. We made UP COUNTRY in the middle of nowhere in the woods of Northern Maine, way up where they stop naming the towns. Naturally, there isn’t really any local talent up there to draw from–no film community, no rental houses, no Starbucks, nothing. So there was no option of using local actors or crew, because even local people were 3-5 hours away from the set. At first it was daunting, but then you begin to realize that you can pull people from everywhere. A plane ticket is a plane ticket. It doesn’t matter that much if the actor is coming from LA or Texas or wherever. So we pulled in all these people from all over the country to work on this little film and it was just a fascinating experience. That kind of got me thinking about the idea of making films in all of these out of the way places and how much we’re all missing by shooting stuff in the obvious locations. That’s kind of where the thought process started. Plus, I have a not-too-small obsession with Jack Kerouac, so that helps.

TSD: Describe A Year Without Rent.

McNelly: The easiest way to describe it is as a series of DVD extras. But that’s way too simple. It’s a big, sprawling project, designed for easy evolution. I’ll spend a year on the road, volunteering on indie films and going to stuff like film festivals and DIY Days and stuff like that. Simple enough, right? What you’ll be seeing from the comfort of your couch is how all of this plays out. We’re using geo-tagging technology to anchor everything to where it happens and we’ll be documenting the experience using video uploads, photography, and good old fashioned writing. You’ll be able to pretty easily follow along on our webpage (www.ayearwithoutrent.com), on Twitter (@YearWithoutRent), and Facebook (http://www.facebook.com/AYearWithoutRent). The focus will be on the filmmakers and events we encounter, exploring them in as much detail as we can, the goal being to introduce filmmakers around the country to the larger collective audience. And, hopefully, we’ll all be able to learn something about how these people work. What’s effective about their process? What isn’t?

TSD: Why is doing this project important to you? What is your ultimate goal with A Year Without Rent?

McNelly: The project comes to me at a unique point in my life. I’m newly single, in-between apartment leases, and really just unsure about where I should live next. So for me there’s a real sense of discovery about the project. It strikes me as the type of thing I’ve always wanted to do but have never really been able to until now. At the same time, I’m old enough where if I don’t do it now, I probably never will. On a personal level, it’s just screaming at me. But beyond that, my hope is that we can get these filmmakers some extra attention for these projects they’ll be working so hard on. And not just the filmmakers, but the actors, the crew people. I would love for an actor to attract the attention of a casting person from this project. That would be amazing. My ultimate goal for the project would be for the year to be up and there to be people asking us to keep going. I think if we can pull that off, we’ll have done a fantastic job. My realistic goal is to not be stuck in the middle of Kansas with $5 in the bank and a car that’s just caught fire.

TSD: How many indie film projects are on board so far? How do indie projects get on board for this project?

McNelly: We’ve got a handful of definite projects, a couple of tentative, and a bunch that have expressed interest and just aren’t sure what they’re status is (a lot of “well, if we get our funding…”). Probably the easiest way to get on board is to go to the webpage and email us. It’s actually a pretty simple process. Let us know as much as you know, and we’ll try and fit you in. The biggest barrier will probably be time and distance. We want to avoid having to drive all the way across the country every other week, if possible. But, you could have guessed that.

TSD: How has Kickstarter and Twitter changed the indie industry?

McNelly: Well, for the big budget indies, it hasn’t much. But for people like me who make features for under $50,000, it’s been beyond huge. Say before you got $10,000 from your Uncle or whoever. They’re your executive producer and so you need, on some level, for them to be comfortable with your final cut. No matter how hands off they are, that’s going to come up. And then the people who have a vested interest in your film succeeding are…your Uncle. But when you raise that same amount of money on Kickstarter, it takes roughly 200 backers. And that takes a hundred or so more people spreading the word about your project to their social networks. Which means that, let’s say, 30,000-60,000 people will have heard about your project during your Kickstarter campaign. And that’s before you’ve even started filming. That’s huge. And that money you raised? It’s effectively a grant. Sure, those backers get cool perks, but it’s not like you have to pay the money back. That’s such a game changer.

A Year Without Rent is going to be one epic road trip! Follow along and stay tuned for updates!