Home Buzz! Prediction…..Story of Mzee and Owen Soon To Be A Disney Movie

Prediction…..Story of Mzee and Owen Soon To Be A Disney Movie 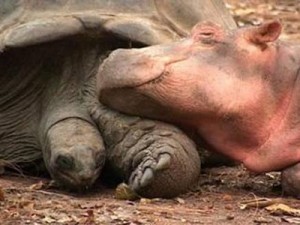 OK….so take a good look at this pic. Cute, huh? Well, it’s been circulating around the internet for a while now. Believe it or not, it’s a real life pic about a baby hippo named Owen who was displaced by the tsunami of December 26, 2004, and ended up becoming attached to a 130 year old male tortoise named Mzee. Now they are inseparable, and in my opinion, I think the baby hippo considers the tortoise to be his surrogate mommy. Inevitably, I fell inlove with this little situation, and I thought, I am soooooo going to write a book about this. Imagine my de-elation when I wandered into Chapters not a week later only to see a huge picture book named Owen and Mzee:The True Story of a Remarkable Friendship. 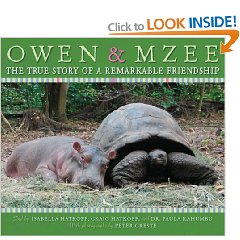 Of course, I bought it for my Youngling — supposedly. It was thanks to my Youngling that I’d even found the story on the net in the first place. So much for my dreams of writing that children’s book I’ve always been meaning to write. Then I thought, “Eureka! I’ll still do it!” And off I went writing my master plan and developing a wonderfully, engaging and heartwarming story…….Only to encounter disaster again! While surfing the web, what did I find? Only the name of Disney someone and some such attached to a comment about a cute pic and oh, what a fabulous story!

So, maybe I will still write the book. My characters are still my characters, even if they are based on a true story that has managed to capture the fascination of the world. HOWEVER, that being said, here is my prediction:

*****Walt Disney and Pixar Animation Studios will soon make a wonderfully endearing, and heartwarming animated movie based on the story of Mzee and Owen in the near and not too distant future.

It will be a movie of the likes of Finding Nemo (directed by Andrew Stanton)…………………..

and Toy Story, which is a modern classic and was THE film that started all this computer animated film stuff (directed by John Lasseter, but Andrew Stanton helped write it!). Hopefully they will let Andrew Stanton direct the Mzee and Owen Movie, because he does great work! And that’s my prediction!

~P.S.~ After all the sites and stories dedicated to this unlikely pair, I think I may have been stuck up in the wilds not to have heard about this story a loooong time ago, and write a fantabulous story before anyone else could. And, in my defense, I was stuck up in the wilds…..on dial up!