Home Be Curious A Little Trivia For Ya Robin Hood Reboot!

Is anyone else saying, “Yay!”? Well, I remember the old Robin Hood (yikes! that was many moons ago!). You know the one with Kevin Costner and that catchy Bryan Adams song. (Loved that song! So did everyone else who got married that year.) Even though I loved that film, not everybody else did. In fact, in some circles, Kevin Costner was panned for everything from his hood to his higgledy piggledy English accent. Unfortunately, his credibility as a top box office draw went into decline with Waterworld and The Postman. No Dances with Wolves either of them, though The Postman was waaay better than Waterworld. Sorry, KC. 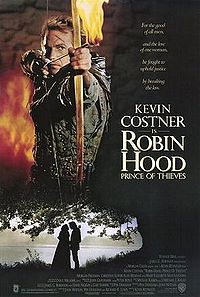 I also remember thinking KC’s version of the man in tights (remember that spoof flick with Carey Elwes, Robin Hood Men In Tights? LOL’s!) was really good. I mean, what was there not to love? You had Robin of the Hood himself, his merry men and a love story between Robin Hood and the fabled Maid Marian. It was a movie about the complicated relationships we have with the people in our lives, and how events in our lives can lead to one defining moment. It had a killer soundtrack (I still like to write to that score), and great actors, and more than a few good laughs. It was a movie about bravery, courage, sacrifice, swashbuckling action, fable, myth and lore. You got some back story on how Robert Locksley became champion of the poor — which was very intriguing because Robin Hood’s origins were shrouded in mystery. Even now there is intense scrutiny as to whether or not Robin Hood actually existed. The movie spawned a whole bevy of documentaries about Who really was Robin Hood? Those docs spoke of an actual real Robert of Locksley and pointed to the fact that the bandit of Sherwood Forest could in actual fact be real. For me, a history buff, it just didn’t get any better than that. AND, Costner’s Robin Hood movie was romantic! I was 15 and I still existed in a dreamy fog where love conquers all. 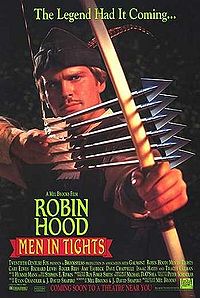 Yet even back then in the tenderness of my youth, I felt that there was something missing. There was a part of me that I am only familiar with now that wanted more. How can I not get more when my dream cast is in this reboot of Robin Hood? I get some serious shivers of thrilled delight and anticipation at the thought of watching the synergy these talented people will create on screen! I believe Ridley Scott, Russell Crowe and 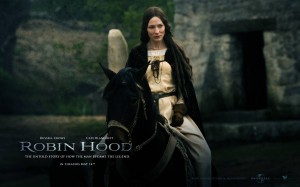 Cate Blanchett (everything she touches turns to gold!) will give me the rush and satisfaction I’ve been yearning for in a Robin Hood movie. Why do I have faith? Let’s just say it’s because   Gladiator fit the bill for me in every way, which is another Ridley Scott and Russell Crowe collaboration. Was I not entertained? Oh, hell yes! Gladiator was gritty and honest and fierce, even excruciating at times, so I am hopeful for the same experience with this version of Robin of the Hood. I couldn’t define what I wanted when I was a kid, but I can definitely give voice to it now. History was a brutal place, humans fought hard for the civility we have now. When I step into my time machine and go to the movies, I want some truth in my epic historical fantasy depictions. I want to see the struggle, feel the pain and endure the sacrifice. I want to taste the triumph and revel in the glory. I want to feel like I was there. If we’re going to do a movie about rising up against tyranny, and the oppressed fighting for justice and equality, let’s do it then. Will I get what I’m looking for in this version? If I was a betting woman, I’d bet that this movie will be a kick a** Robin Hood flick! Not to say, however, that KC’s version doesn’t still hold a very fond place in my heart.

Anyhoo, that is my essay on my excitement to see Robin Hood. And to prove my point that there is still an intense interest in just who was this hooded hero?, History TV is airing a 2 hour documentary exploring the Robin Hood legend. Case closed. Robin Hood rocks. Can’t wait to see Russell Crowe’s Robin Hood break out that famous bow! Long live the outlaw! This is your Brighter Scribe signing off to watch the History Channel!