Home Be Curious A Little Trivia For Ya Russell Crowe : My First Sighting via The Quick & the Dead

Russell Crowe : My First Sighting via The Quick & the Dead 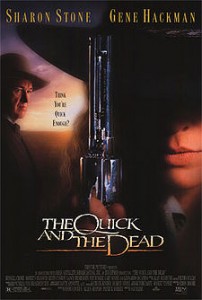 The Quick and the Dead_Wikipedia

My earliest Russell Crowe sighting was in The Quick & the Dead. This movie was back in the day when Sharon Stone was a HUGE star. Sharon Stone was fairly fresh off Basic Instinct (if you can call 3 years fresh in Hollywood) and she was still pretty popular. Anyway, she was the headliner in this flick that starred old goodies like Gene Hackman, and young faces like Leonardo DiCaprio (boy, did he look young and fresh faced. He looked like such a wee babe!).

Now keep your eyes peeled…wait for it….and there! My first Russell Crowe sighting ever! 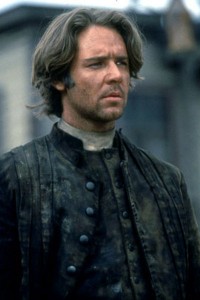 Russell Crowe as Cort in The Quick and the Dead

Russell Crowe played Cort, a reverend who used to be one of Herod’s henchman who Herod (played by Gene Hackman) forces to enter into the quick draw competition. I saw this movie in the theater, and back in the day, I would have darn near forgot that Russell Crowe was even on screen if it hadn’t been for the fact that he had a story line! I was a teen and hence I only had eyes for Leo D. (BTW, I love any excuse to use the word hence!) Isn’t it funny? When you’re young it’s all about looks. When you’re old(er), it’s all about substance. What does that say about me? Yeah!

Anyhoo, just 5 years later, RC would go on to win an Oscar. Amazing how quickly things can change. Who would have thought he would have been an Oscar winner? I know I never did. But as I said before, things have certainly changed. Now that I am a woman of substance, I only have eyes for Russell Crowe (unless he’s acting with Leo D. Then I have to split screen time evenly because they are both so stellar in the talent department.) because: a) he has amazing mad talent, and b) Virtuosity was easy on the eyes. (I have substance, really!)  Many of RC’s movies are on my Favorite Movie List. Truth be told, he’s one of my favorite actors. I am so not hearing the buzz that he is not as strong a box office buzz as he used to be, and YES I loved Robin Hood!