Home Buzz! Season of the Witch Was Oh, So Close

Season of the Witch Was Oh, So Close 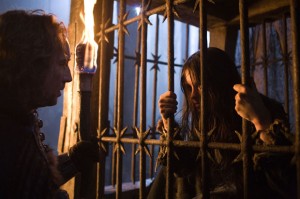 Season of the Witch_Witchcraft will not be tolerated.

Season of the Witch was a movie that didn’t quite hit the mark though it had its moments. The concept for the film is pretty cool. I mean, what is not to like about a medieval supernatural flick complete with knights, a witch, demons and possession, and a journey that you know will be fraught with danger around every turn? And though I’m down for a movie of this nature, excited (as a matter of fact) about the blending of medieval times and the paranormal, with this movie I felt that less would have definitely been more.

Season of the Witch is set in a medieval world where absolution is gained through violence, and the church and the Black Plague has the land well within its powerful grip. Superstition is the order of the day and innocent women are executed by holy men for the crime of witchcraft. Behmen (Nicholas Cage) and Felson (Ron Perlman) are two disillusioned knights tired of fighting in the Crusades. Fighting the infidel has lost its allure, and after Behman accidentally kills an unarmed woman, he and Felson desert the army, deciding to return home. Along the way… [Read more…]