Home Books On Film TrueBlood “If You Love Me, Why Am I Dyin’?” Review : Won’t Somebody Help Me? Part 1

****DIVERT YOUR EYES AND COME BACK LATER IF YOU HAVEN’T WATCHED THIS LATEST EPISODE OF TRUEBLOOD BECAUSE THIS REVIEW IS CHOCK FULL OF SPOILERS!!!! BUT MAKE SURE TO COME BACK AFTER YOU’VE WATCHED IT AND TELL US YOUR TRUEBLOOD THOUGHTS!!!!**** 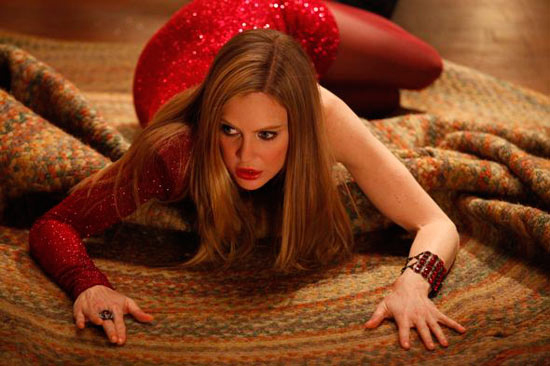 I’ve said it before and I’ll say it again, this season of True Blood is blowing me away! Just when you think it can’t get any more awesome, it goes and packs a whole lot a story into 55 minutes. And what a 55 minutes it was. the title “If You Love Me, why am I Dyin’?” is so fitting. Poor, poor Jason. Won’t somebody help him? He just DOES NOT have any luck with women. I feel so bad for him. He’s in trouble… and it’s just getting started. As for Eric, all I can say is that I’m glad he has both Pam and Sookie to look after him, and boy, is he ever adorable!

“You just killed my Faery Godmother!” ~ this quote by Sookie is absolutely priceless and my favorite quote of the night.

We pick up where we left off with a shirtless, befuddled Eric standing on the side of the road. Sookie is not impressed and reminds him with a “You know perfectly well why I smell the way I smell” and an exnay on the mellsay tone of voice. Eric describes what she smells like out loud and we get a visual on just what Sookie smells like, and it’s no wonder the vampires go nuts for faeries. Wheat, honey… sunlight. As enticing as Eric’s description was, I couldn’t help but think of a Halsa Hair shampoo commercial with a picture of Sookie on it filled with viscous liquid that looks like honey. YUM! 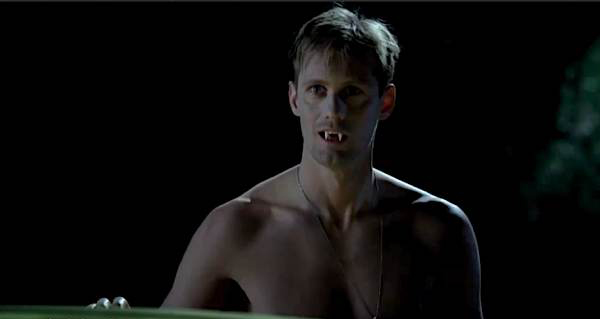 Anyhoo, Eric’s fangs drop involuntarily and Sookie peels away in her little YELLOW car. (A car the color of sunlight? Now I get the color…) Thinking she is a safe distance away, she stops and looks back and there is no sign of Eric… because he is right beside her! He reaches into the car in a blur of movement and makes a grab for her.

Like any faery fearing for her life, Sookie takes off running and of course the enthralled and adorable Eric follows. Sookie being Sookie, she punches him in the face with a defiant “I am not your F-ing dinner!” Point taken. Mr. Northman is effectively cowed.

Eric hilariously calls Sookie “Snookie” (most definitely not! Bleh!) and reveals to Sookie that he has no clue who he is. But he does remember the sea, identifies it as being linked to his “home”. He breaks out his Mother Tongue and gets lost for a moment remembering the horrible events of the night. Namely Marnie’s cold empty eyes reaching into him and emptying him. How horrible! He also sees her face and the face of the spirit. Thank Odin he remembers that much! I’m actually surprised, and it’s vital info if Sookie and Pam are going to be able to help him.

He tells Sookie that everything he was was taken from him. He says this in such a forlorn manner that my heart actually squeezes with empathy. What Eric said obviously got to Sookie too because she decides to help him. She does lay down some ground rules though. No touching and no biting. Eric agrees and as they walk to her car he tells her he’s really grateful to her for her help. Awww! ‘I think Eric is absolutely adorable’ has become my favorite catch phrase for this season. Oh, and ‘Poor, poor Jason’. That’s another phrase running through my head, especially with this episode.

Back at MoonGoddess, Tara’s pissed about the whole Eric thing and so is everyone else. None of them know the extent of what happened to Eric yet. The coven wants to call the police and Lala’s trying to get them to see the stupidity of that move. “Eric is ancient, stupid powerful and he’ll kill all of us!” Well, Lala is right, Eric would kill all of them… if he was the old Eric.

Marnie is putting her own spin on what Eric did. She’s twisting it and turning it into a religion thing saying that Eric busted in on them unprovoked, tried to stop them from practicing their religion, and then attacked them. Again, all unprovoked. Oh, Marnie, you’re good. You should have been a politician. Jesus asks Marnie what she did to get Eric to high tail it out of there. Marnie claims to have no idea. I tell you, I’m not buying what Marnie is selling.

Poor, poor Jason. He’s all bit up lying on that dirty mattress at Crystal’s mercy. While he’s burning up with the fever that will turn him into a were-panther, the Hotshot crew is outside sitting around a campfire gnawing on raw meet right off the bone and talking about their origins and Ghost Daddy, Ghost Mommy and how the Sky People ruined everything. By the next full moon Jason will be a panther, Felton and Crystal will get what they want and then Felton won’t need Jason anymore. Crazy Crystal promises to keep Jason safe. After all she “loves” him, is grateful for everything he’s done and is going to do, and she wants to be with him. Sick. Sick. Sick and twisted.

Bill has just passed the sentence of the true death on a vampire who got caught on video feeding on a human when Jessica comes for visit. Even though she beats around the bush claiming to have come for Advil, Bill cuts to chase. She tells him about her feeding on another willing human that wasn’t Hoyt. Bill tells her to vamp up and tell Hoyt. Better he hear the truth from her than someone else.