Home Books On Film TrueBlood “If You Love Me, Why Am I Dyin’?” Review : Won’t Somebody Help Me? Part 2 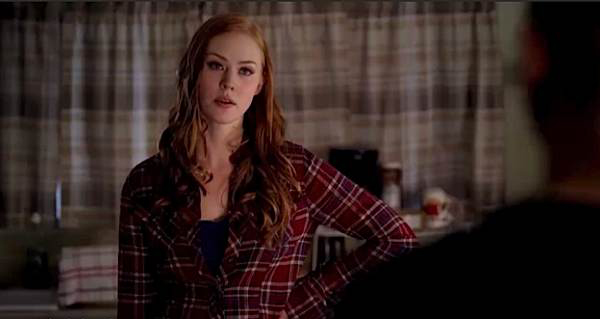 Back at Sookie’s, Eric waits for an invitation from Sookie to enter the house. He doesn’t know yet that it is his house and Sookie isn’t about to enlighten him. Sookie calls Pam at Fangtasia and Pam whooshes over. Sookie is washing Eric’s feet and discovers like the rest of us in another one of this episode’s adorable Eric moments that he’s ticklish. He senses Pam and when she busts in, Eric jumps up from the couch and shouts in a startled voice, “Who the F is she?!?” Totally hilarious.

This pleases Eric until Sookie succinctly puts him in his place and mentions going to Bill. Pam threatens Sookie and Eric shoves her to the floor and Pam slides across it. She gets up and Eric warns her to be nice to Sookie which is another LOL moment.

Pam is understandably afraid for Eric and believes this entire situation is all part of Bill’s plan to get rid of Eric for good. I agree. It’s decided that Sookie will hide Eric and for her services Sookie wants compensation.

Meanwhile Sookie is making sure Eric’s cubby is safe. Here’s a clip.

Lala, Tara and Jesus are back at L and J’s place having talking over the night’s events. Lala’s in favor of going to Fangtasia and throwing themselves upon Eric’s mercy. Tara and Jesus aren’t. They talk Lala out of it, or so they think.

Andy is sitting in the Merlotte’s parking lot and calling Jason since Jason has been missing for 48 hours. Without Jason, Andy can’t stay off the V. Sam appears suddenly and Andy loses it, threatening Sam verbally and with a gun before speeding off with his siren’s blazing. 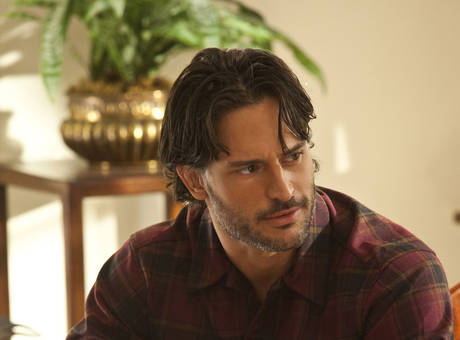 Sookie visits Alcide in Shreveport asking for his help. At first he thinks Sookie wants him to kill Eric, but before she can tell him everything Debbie comes into the room. She’s clean and sober and she’s found Jesus. In her defense, she really does clean up good. She also wants to earn Sookie’s forgiveness, but I don’t believe it. Caught off guard, Sookie leaves. Alcide follows her outside and isn’t happy when Sookie tells him to nevermind helping with Eric, but she does wish him and Debbie well.

Tara finds Sookie at Merlotte’s and asks Sookie to talk to Eric. Sookie claims not to have seen Eric and that he’s gone missing. When Sam comes up to talk to Tara, Sookie makes a quick escape. Sam and Tara go outside for a drink and to catch up when Jesus shows up and says Lala’s gone. So he and Tara hop in her car off to Fangtasia.

Bill’s at a restaurant trying to get a hold of Eric and having no luck and he’s not happy about it. He’s also having a meeting with Portia and she propositions Bill. Bill accepts after clearly stating that he will never love her. Ouch! Jess gives Mikey the haunted doll and Tommy trying to get Sam to help him swindle Maxine out of her house. Tommy’s got a get rich quick scheme and Sam wants no part in it. He’ll also tell Maxine about the natural gas gold mine she could be sitting on if Tommy doesn’t. This infuriates Tommy and he storms out and that’s it for Sam and Tommy’s truce.