Home Be Curious “One Hour Fantasy Girl” Review: A Film Adept in Making You Grateful

“One Hour Fantasy Girl” Review: A Film Adept in Making You Grateful 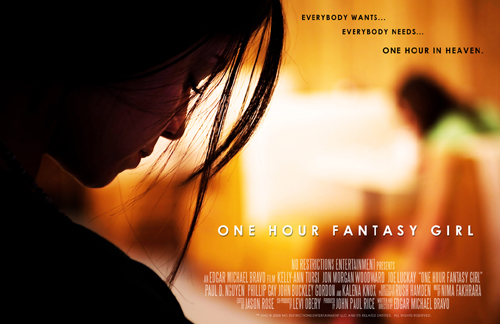 The definition of a social issue film is defined as a narrative film that merges a certain social conflict into the lives of its characters. The social issue genre film has its roots in the 1930’s and 40’s, so it has been around a very long time and chances are you’ve seen one before. Yet you haven’t seen one like One Hour Fantasy Girl, a film written and directed by Edgar Michael Bravo and produced by No Restrictions Entertainment.

This is a movie based on a true story which makes the bleakness and the reality of it have that much more impact. It’s definitely a look at the darker side of life in an honest, and at times, extremely unflinching way.

Brandi/Becky is a 20 year old woman who has a dream of investing in real estate as a way to improve her situation. Tired of struggling to get by, she gets an offer from a friend (who becomes her pimp) to make some “easy” money as ‘a by the hour fantasy girl’ where she fulfills any fantasy one might have, as long as you can pay her fee and as long as there is no sex or kissing. It’s pretty straight forward but it doesn’t mean that it is pretty. As a fantasy girl no fantasy is off limits, and pleasing the client is paramount if you want repeat clientele. Everything has a price, and there is a price for everything. One Hour Fantasy Girl makes that aphorism really hit home.

There is a desolate truth and a certain honesty to Becky’s story that evokes sympathy for her, yet it’s not as if she spends her time making you feel sorry for her. She is a strong and determined woman — she had to be strong to withstand the things she learned about people and not run screaming from the room and descend into insanity. But she is a survivor of child sexual abuse and anyone who can survive that has strength.

There is a quote in the movie that stood out to me. “When you have discipline you make something of yourself.” Becky had such discipline. It was apparent in everything she did and every decision she makes until she lets emotion cloud her foresight. Even we are duped by a sense of safety in the film so that when a betrayal occurs we feel it just as keenly as Becky does. We feel just as much impotent anger as Becky does. And in the end it is made so clearly evident that so often in a life like Becky’s there is little one can do to get any sense of justice. All you can do is keep going. It is also made keenly apparent in a life like hers, emotions get you in trouble and they dull your instinct. Blocking the need to feel, which is a luxury in itself, is probably the biggest obstacle Becky must overcome. It is why being cold and emotionless if you are a fantasy girl is not just a necessity, it really is survival.

The film demonstrates instances of kindness and then shocking cruelty. There is a real sense throughout the film that something is going to go wrong to derail Becky’s pursuit of her dream, but what that obstacle is you just don’t know. There are many forms a problem could take in this movie. Danger can and does come so suddenly and unexpectedly when you stray from the acceptable forms of society’s morality; but this is the harsh reality for some people. To stray is the only choice they have, to do the unpalatable in order to escape the lurid state that is their life to hopefully somewhere better in the future.

There were definitely moments in the film that made me so uncomfortable that it made me squirm. The bleakness of Becky’s journey to a freedom that seems unattainable is at times harsh and not easy to watch. But that is what makes One Hour Fantasy Girl so intensely effective. It’s adept at making you grateful for your own situation in life because it really could be much worse. It is a film that makes you think, and isn’t that what a social issue film should do?