Alexander Skarsgard Explores the Dark Side in the ‘Straw Dogs’ Remake

Kyra Dawson September 16, 2011 September 16, 2011A Little Trivia For Ya, Be Curious, Books On Film, Buzz!, Celebrities, Did You Know?, Face Time, General, Movie Comments, On the Casting Couch, Random, Shout Out!, Something Wicked, Word Of The Day

The original Straw Dogs film was directed by Sam Peckinpah in 1971 and had distinctly controversial subject matter. The concepts of rape, murder and violence was not mainstream material to portray in graphic detail on film. If we judge the film by today’s standards, considering what we see on primetime cable, will this remake directed by Rod Lurie raise as many eyebrows and cause as much furor as it did in the ’70’s? Will it be any more or less controversial now in the year 2011? Are we more or less culturally sensitive now as opposed to 1971? Unless our views on morality and these disturbing issues have changed radically since 1971, I’m certain this remake will at the least garner intrinsically shocked reactions and leave open to question as to how much is too much to depict in film. 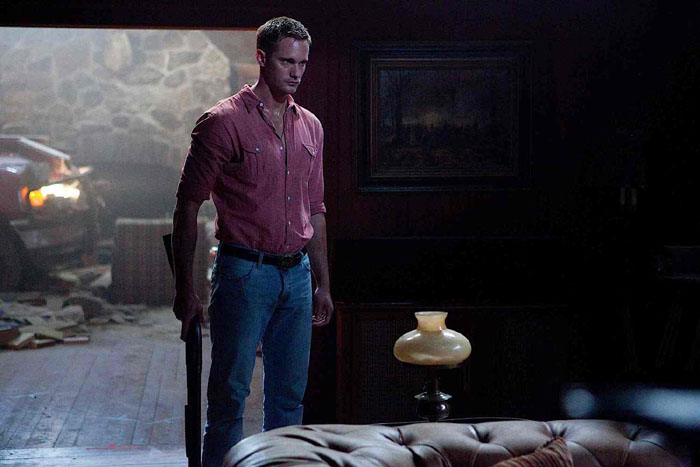 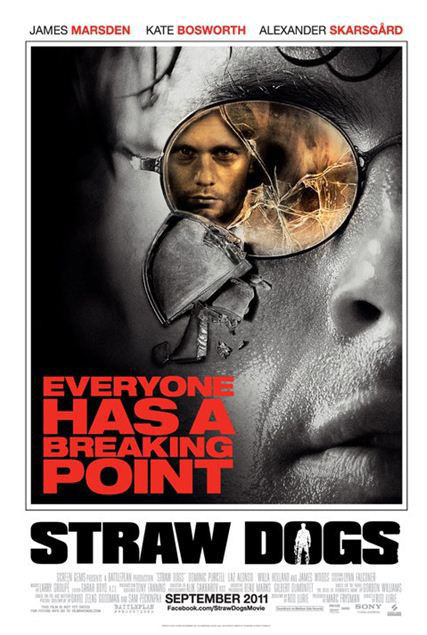 Yet the buzz surrounding this film isn’t only because of the sinister subject matter or its dauntless director Rod Lurie. It’s due mainly to the casting of a Swedish actor whose star is on a meteoric rise. Alexander Skarsgard has gained the attention of fame due to his quasi villainous role as roguish Viking vampire Eric Northman on True Blood. Unlike his loveable, antihero vampire persona on the HBO hit which just concluded its 4th season, Skarsgard’s role as Charlie Venner in Straw Dogs is one that is unlikeable in the extreme. There is no mistaking the fact that Skarsgard is a true villain in the remake of the Peckinpah psychological thriller.

Though both the remake and the original film are based on the novel The Seige of Trencher’s Farm written by Gordon Williams, this new version of the film is different from the original.

The Straw Dogs story centers around L.A. screenwriter David Sumner and his wife Amy. They relocate to her hometown in the deep South and they come into contact with Amy’s ex, Charlie Venner and his crew. Tensions begin to rise between the locals and the Sumners, and the building conflict escalates into violence which threatens their lives.

Skarsgard’s character commits a heinous act that makes him a true villain of the meanest sort and it’s a role that we haven’t seen Skarsgard portray as of yet.

Charlie Venner is truly a detestable character and Skarsgard has promised that he tried to bring a three dimensional quality to David Sumner’s nemesis. Characters like Charlie Venner are risks and challenging to take on. An actor must be confident in his ability in order to go over to the dark side and explore the boundaries of their commitment to the craft of acting. And that was the appeal of the project for Skarsgard. It was a chance for him to better understand his own darker impulses. 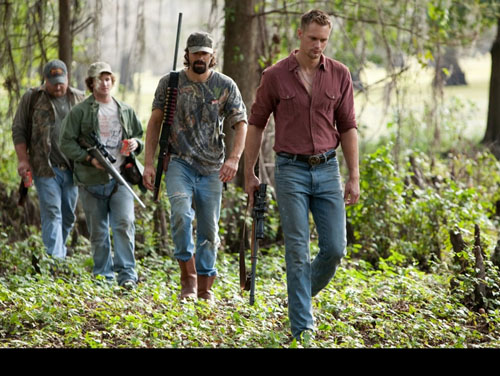 In an interview earlier this year in the L.A. Times, Skarsgard is asked about his role in the film:

“Look around,” he said, “people are always, big shiny white teeth, big smiles, everything’s fantastic. How sincere is that? Are people really genuinely that happy all the time or is there something in there that they’re trying to fight? I know I am. I think it’s really good to acknowledge that there is that inner battle. Of course that’s interesting exploring. It’s scary and it’s dangerous, but it opens up your soul.” 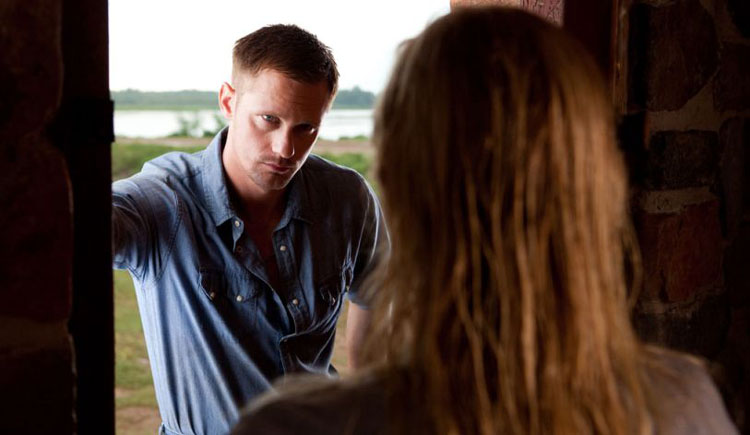 No matter how much one enjoys Skarsgard in True Blood, his role in Straw Dogs is one that will elicit intense reactions of dislike from audiences, especially from the actor’s female fan base. It is a role that will push Skarsgard to the limit, though I have no doubt that his magnetic screen presence will make his portrayal of the Charlie Venner character unforgettable, no matter how detestable that character is.

FYI ~ the definition of straw dog is something that is made only to be destroyed.