Home Random Are You Afraid of Friday the 13th?

Are You Afraid of Friday the 13th? 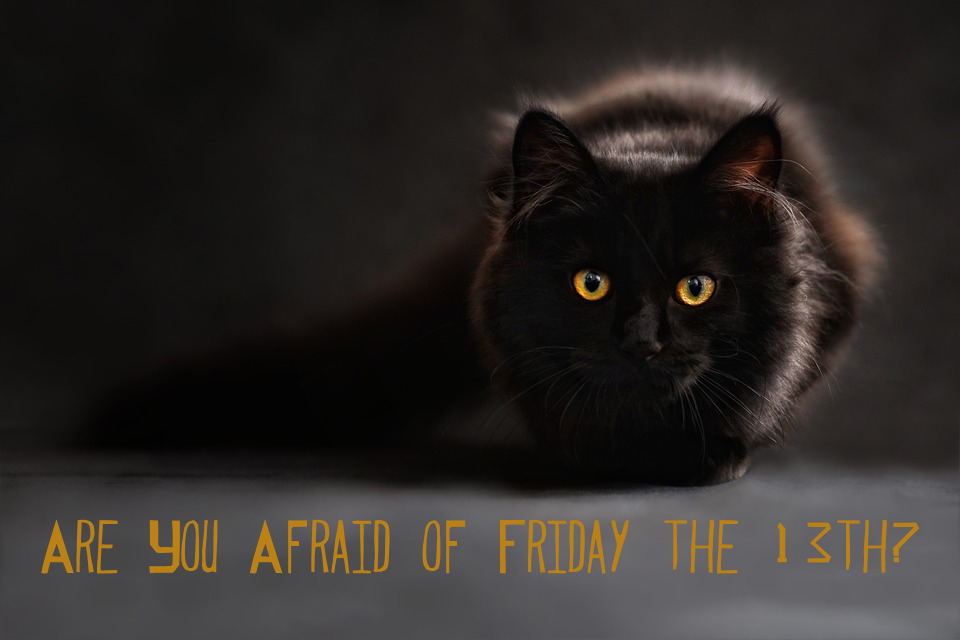 Friday the 13th seems to rile up the superstitions of even the most level headed, logical and rational of personalities. It’s a dark day, shrouded with ill portent, black cats, unfortunate mishaps and plain old bad luck. And for movie buffs like us, we automatically think of super scary Jason Voorhees and the legendary Friday the 13th film. Whenever this dreaded day looms on the calendar people seem to lose their minds. So, I had to ask. Are you afraid of Friday the 13th? And if you are, why?

If we take a look at a typical Friday it’s TGIF all the way home, or to the bar for some. But Friday the 13th is an unlucky or even evil day, so Twitter, Facebook, basically everywhere and everyone hails it as a day to lay low, beware of black cats and ward off anything that might cause you to be cursed. It can happen up to 3 times a year too. This year we only get 2: today and October 13th. So far it’s been blamed for everything from a broken mug to lost keys and stubbed toes. And that’s just today.

But what about those more spooky and sinister happenings connected to Friday the 13th? Remember when the the premiere of the Thorpe Park SAW ride had to be shut down because of a computer problem? Weird.

On Friday, October 13th, 1972, a rugby team from Montevideo on a chartered Uruguayan Air Force plane crashed in the Andes Mountains in South America. Their struggle to survive has been immortalized by the 1993 movie Alive starring Ethan Hawke.

These are some very spooky, sinister and sad events that can explain why Friday the 13th is dreaded, but things go even further back in history than that. Let’s get biblical.

Biblical History of Friday the 13th

Did you know it is considered unlucky for 13 people to eat together? No joke. This stems from a connection to the Last Supper.

We all know about the apostle Judas. He was the dude who betrayed Jesus to the Romans for 30 pieces of silver. Coincidentally he also happened to be the 13th person to sit down at the Last Supper.

Ever hear of the Tower of Babel? Up until a certain point in biblical history everyone on the planet spoke the same language; that is until some genius cooked up the idea to build a tower that could reach Heaven. Well, this pissed off God and as a punishment God made it so that everyone started speaking a different language. Hence the builders couldn’t understand a word anyone else said and the building of the Tower of Babel ceased and desisted. Biblically speaking this explains the origins of the different languages of the world and it is where the word babble stems from. Oh, and when did this happen? Friday the 13th it appears.

We’ve all heard of Noah and his Ark, right? God told Noah to build a giant boat so all creation wouldn’t be destroyed and life would survive the flooding of the Earth. Noah’s Ark is the only reason we’re here today if you believe what’s written in the Bible. Some historians claim that Friday the 13th is the day the Great Flood began.

Some biblical scholars believe that Friday the 13th is the ill fated day that Eve bit that apple from the Tree of Knowledge. But Adam did too. And he had free will. Let’s not forget that. Maybe if they had both known that Friday the 13th was a bad day to be in the garden, maybe this origin story would have been different.

The Meaning of the Number 13

Is the number 13 really evil? Some hotels and other highrise buildings don’t even have a 13th floor. Ever stepped into an elevator and seen the 13th button missing? Nope, nada, no acknowledgement whatsoever. Some people won’t fly on the 13th or make major decisions like having their wedding take place on the 13th. It seems the number 13 is no bueno. But why?

The number 13 in a tarot deck is associated with death, but those in the know are also aware that when this major Arcana card appears in a reading it usually means change. In its upright position it means the seeker will experience endings, beginnings, change, transition or transformation which can be exciting if you let it. Even in its reversed or upside down position it doesn’t literally mean death or dying.

The number 13 is thought to be an odd number whereas the the number 12 is considered as the number of completeness, a perfect number. There are after all 12 gods in the Greek Pantheon, 12 hours in a day, 12 months in a year, even 12 eggs in a dozen. Perfection is a hard act to follow, especially when even a Dirty Dozen is considered to be more desirable than an unlucky 13 and especially when you discover that it takes 13 witches to make a coven. The odds, it seems, are definitely not in favor of unlucky 13.

So there seems to be lots of reasons supporting why we should be afraid of Friday the 13th. It’s a day shrouded in mystery and fear since it seems the dawn of time. If you are afraid of this day, you are not alone. Lots and lots of people suffer from Paraskavedekatriaphobia — fear of Friday the 13th, which is an actual recognized disease — which might mean you could get a doctor’s note if you decide to stay home today.

So how do you survive this historically unlucky day?

5 Things You Can Do To Survive Friday the 13th

Ever hear the phrase, “Change your vibration change your life?” Well you can. It’s really that easy. If you believe bad things will happen to you then they will. If you believe that you are unlucky then you are. It’s that simple. If you choose to believe that this is just another day like any other day then it will be. Or better yet, if you choose to designate that from now on Friday the 13th is your lucky day and expect great and wonderful things to happen to you then they will. So give it a try and see what happens when Friday, October 13th rolls around. Change the rules. And be sure to let me know what happens too! 🙂

That’s right. Break out the lucky rabbit’s foot, your lucky socks, your lucky pencil (Grey’s Anatomy reference? Check!) or anything else that you feel will ward off evil. I know you have a lucky charm or know of someone who when they bust out their good luck charm great things happen. I mean you’re already superstitious, so embrace it!

Never doubt the power of prayer. Madonna does it, they sang it on My Best Friend’s Wedding and even Oprah believes in it. Did you see it when she asked Iyanla, “How do you pray?” Just do it. Saying a prayer has power, even if it’s, “For the love of God, [insert request here]” or “Lord save me from [insert request here]” you are praying. Even meditation or a plea to the heavens for help qualifies as a prayer. When all else fails, what can it hurt?

4 – Avoid Everything and Everyone.

Put the blinders on and steer clear of black cats, don’t walk under ladders, don’t take elevators. You get my drift. If nothing else you’ll drown out all the noise and get to hear yourself think and you’ll get your cardio in for the day.

The end. Tomorrow is another day — and it’s not the 13th.

So tell me, are you afraid of Friday the 13th? Leave a comment and let me know. And good luck. You might need it.