Home Be Curious A Little Trivia For Ya Baby Bump Luck, 6 Degrees of Tom Cruise and Oscar Curses 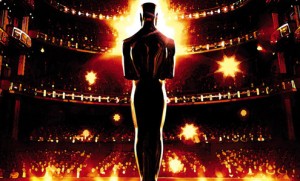 Awards season is always exciting, but nothing compares to the frenzy that is the Oscars. The Oscars is a celebrity mecca where stars schmooze and primp and bling to the nines. It’s an event where stars usually compete in a good natured fashion to win Oscar gold while trying to eclipse one another, all the while smiling through teeth bleached so white one needs sunglasses to obscure the glare. There’s also a lot of Oscar myths and superstition aplenty.

Through the buzz, avid viewers will hear entertainment correspondents gush over baby bumps and speculate about the mythical luck having a baby on board can bring. Next, murmurs of the two pronged Dreaded Oscar Curse begin to stir soon after the Academy rolls up the Red Carpet. The first myth is the one that supposedly befalls actresses who win an Oscar at the pinnacle of their careers only to lose their love life. The second and the most fearsome Oscar fable is flunking after winning an Oscar. Was winning that first Oscar a fluke? is the inevitable question rolling off wagging tongues if an Oscar winner’s next role is less than Oscar worthy. And then there is my theorization over the uncanny phenomena I like to call 6 Degrees of Tom Cruise. What’s that you say? It’s my examination of the serendipitous link between the bizarre occurrences of actresses who have been Tom Cruise’s sweethearts and the fact that they seem to go on to win a golden statue on Oscar night. One thing’s for sure, it just wouldn’t be Oscar if some curioser and curioser things weren’t going on.

Baby Bump Luck – Is it fact or fiction? [Read more…]