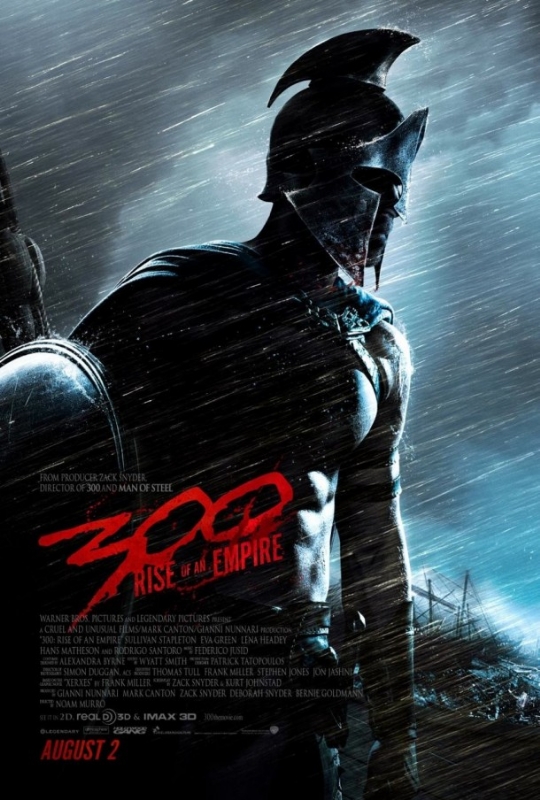 Zack Snyder sure knows how to whet our appetites! The first movie poster for 300: Rise of an Empire can be summed up in one word — glorious. Though the title has been changed from 300: Battle of Artemisia we can still expect the same glorious spectacle from this movie as from the 2006 vanguard film 300. The upcoming film will continue in the stylistic paint palette and graphic novel imagery that lends the story an ancient atmosphere and adds intensity to the fight sequences, all while linking the film to the work of Frank Miller. This is a style that we have come to know well and expect from the 300 universe.

Both Lena Headey and Rodrigo Santoro will reprise their roles as Queen Gorgo and Xerxes, while Eva Green (Dark Shadows) joins the cast as Artemisia. Noam Murro (Smart People) will direct the film while Zack Snyder and Kurt Johnstad are co-writers of the screenplay for the Warner Bros. movie.

This swords and sandals movie looks to be a spectacular addition to the epic 300 franchise. And one things for certain, Spartan soldiers make standing in the rain look good.

Based on Frank Miller’s latest graphic novel “Xerxes” and told in the breathtaking visual style of the blockbuster “300,” this new chapter of the epic saga takes the action to a fresh battlefield—on the sea—as Greek general Themistokles (Sullivan Stapleton) attempts to unite all of Greece by leading the charge that will change the course of the war.