Game of Thrones Episode 7 “You Win or You Die” Review 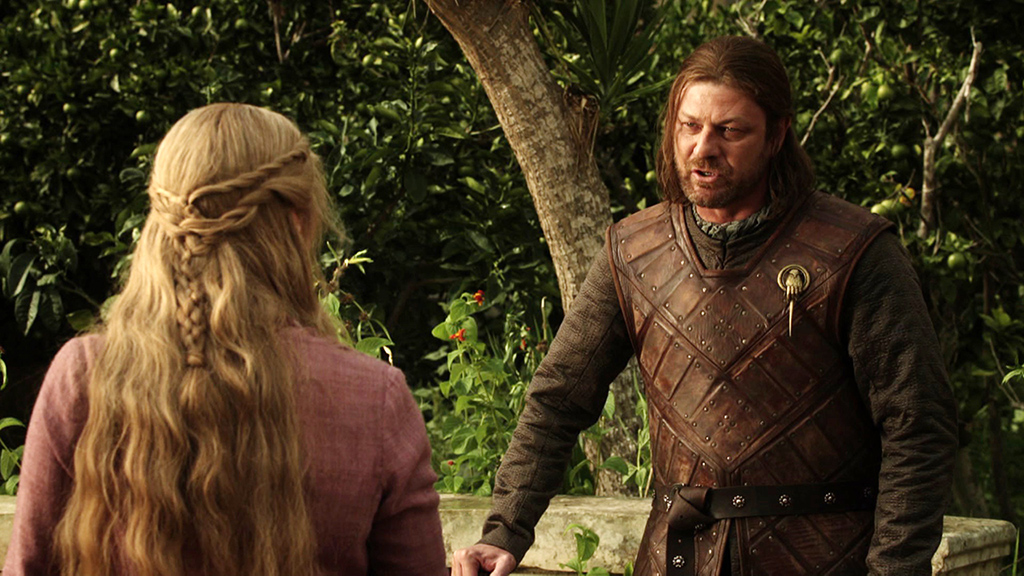 Ned confronts Cersei about her adultery.

Well, the manure’s really hitting the fan now. And you know how much I love Ned Stark, but sometimes I want to strangle him with his stubborn honor. *Sigh* Although it may serve him well in the end. Yet one thing I am noticing though about Ned is that when it serves his purpose he will bend the rules if he thinks it’s in the name of justice and honor.

Jaime Lannister is in his father’s war camp reading Ned’s summons for Tywin to come to court and mocking Ned’s decisions. We finally get to meet the dread Tywin Lannister and he is formidable. He never stops skinning that stag as he imparts some more Lannister life lessons to Jaime and tells him the fate of the Lannister dynasty rests upon his broad shoulders. He thinks Jaime was a fool to not only attack Ned Stark but to then let him live. He also orders Jaime to take 30 000 men and raid Catelyn Stark’s childhood home to prove that you don’t mess with the Lannisters. In life, all that matters is the power of the family name. All the while he’s talking, Tywin is skinning and butchering a stag like it’s nobody’s business. Quite menacing and gross. 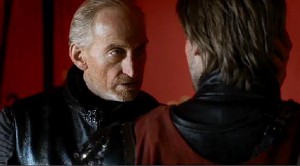 Meanwhile back at King’s Landing, Ned confronts Cersei. He calls a spade a spade, meaning, he bluntly tells her he knows her children are Jaime’s and he’s going to tell the king. He also accuses her of hurting Bran. She doesn’t even deny it — in fact, she defends her actions. Ned tells her to get out of Dodge and run far, far away. This doesn’t phase Cersei at all. I think Cersei is the most deadly and cunning character on the show. She will kill them all if it means the Lannisters will win. And to think, all of this could have been avoided if only Robert had loved her.

Littlefinger is revealing his master plan to the women of pleasure in his employ as he instructs the newly hired and very clever Roslyn in her craft. It is here that we get the first tangible and ominous glimmer that Ned is in some very big trouble and is about to be double-crossed and he won’t even see it coming. How did I ever trust this guy? I mean, he runs a brothel for goodness sakes! (As 50 Cent would say, he’s a P**P!)

Back at Winterfell, the new Wildling servant Osha (better known as Nymphadora Tonks in the Harry Potter films) is being harassed by Theon Greyjoy when Maester Luwin puts him in his place and sends him away. Osha too had put Greyjoy in his place for his arrogance two seconds before and something tells me that Osha and Theon will have words again. Osha, who seems very matter of fact, tells Maester Luwin that the White Walkers are not sleeping. This is dire news indeed. Even more dire is the fact that Benjen’s horse has returned to Night’s Watch riderless and now all Jon Snow can think of is becoming a Ranger so he can find his uncle.

The hedonistic Robert Baratheon has been gored by a boar. He was drunk while on the hunt and he is on his deathbed. Robert summons Ned, and Cersei and Joffrey are there when he arrives. Robert kicks everyone out except for Ned and this makes Cersei nervous of course. He gets Robert to write down his last will and testament proclaiming Ned Regent and Lord Protector until Joffrey, his rightful heir, comes of age. Ned only writes rightful heir, a small tweak that doesn’t tarnish his honor too much and Robert signs his John Henry on it. Ned doesn’t tell Robert that his kids aren’t his but Jaime’s.

I understand this, but you just know Cersei wouldn’t have hesitated to spill any beans, dying or no. Robert at least does the honorable thing and calls off Dany’s assassination. He also asks Ned to help Joffrey be a good man and king. Yeah, good luck with that. Joffrey’s the spawn of full on evil. Ah, poor Robert Baratheon, murdered by a pig because he was drunk. An ignoble end. And wouldn’t you know it? Another Lannister was in the mix and supplying the wine no less.

Ned orders Varys to call the hit on Dany off, but alas, it’s too late. And this can only play into Dany’s plan to go home and claim her birthright, the Iron Throne, for her son. In fact she’s trying to use her wiles on Khal Drogo to entice him to win her throne back. She even teaches him the word throne. Drogo however has no interest, so Dany’s little scheme is thwarted before it even begins. Tenacious little thing that she is though, she tries to enlist Ser Jorah’s help in convincing her husband, but Ser Jorah is of the opinion that nothing before its time. But there’s nothing like an assassination plot on his beloved wife’s life to light a fire under Khal Drogo’s fierce warrior butt.

While in the market of Vaes Dothrak, an assassin in disguise as a wine merchant tries to get Dany to drink some poison wine. The ever watchful Ser Jorah (did I mention he receives a secret pardon missive from the Spider? I wonder who’s side Varys is on?) comes to the rescue (again) and the plan is discovered and the assassin is captured for punishment. When Khal Drogo finds out, he’s furious and swears before his Khalasar and Dany that he will cross the sea and conquer and subjugate the men and women of Westeros and lay claim to the Iron Throne. The assassin is tied naked and bloodied to walk behind Dany’s horse. 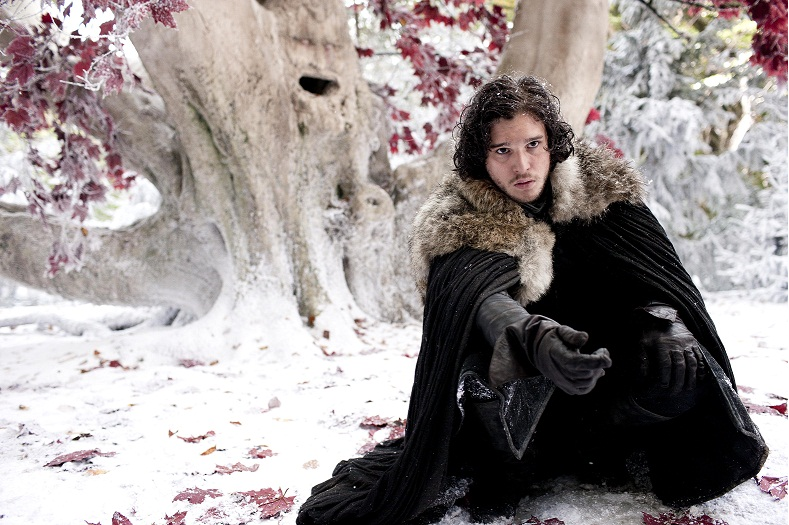 At Night’s Watch, Jon and the other new inductees are readied to take their vows. Instead of being made a Ranger like he and everyone else thought, Jon is made the personal steward of Lord Commander Jeor Mormont. Jon is crushed, but Sam talks some sense into him, telling Jon that he is being groomed for command. This heartens Jon and together with Sam, Jon takes his vows in the weirwood at the foot of a Heart tree. Moments later, Ghost appears carrying a severed hand in his mouth, which definitely isn’t good.

Renly pulls Ned aside and suggests he take Joffrey into custody to stop Cersei from seizing power and reveals he wants to sit on the throne, but Ned is stubbornly determined to uphold the succession which means Stannis is next. Ned has just lost an ally in Renly. Seeing that a struggle for the throne is in the offing when Robert dies, Ned sends a missive to Stannis. He’s also summoned Littlefinger to ask for his help with attaining the support of the Gold Cloaks (Littlefinger pays them, so you see, even in Westeros it’s all about the Benjamins!) to head Cersei off at the pass. But it’s so obvious that Littlefinger has ulterior motives. Littlefinger also offers Ned advice on how to run the realm, and how he’ll be right there to help Ned run things. With suggestions of treason coming at him from all sides, Ned stubbornly clings to his honor. 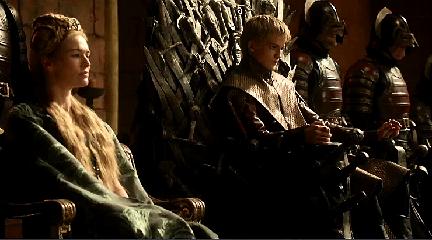 Joffrey on the Iron Throne.

Robert dies and Cersei swiftly plants Joffrey on the throne and proclaims her son king. Ned descends on the throne room with Varys, Littlefinger, guards and Robert’s last wishes in his hand. Ned gives the scroll to Ser Barrister to read, and Barrister hands it over to Cersei when she demands to see it. She’s all puffed up with confidence, surrounded as she is by both Lannister guards and the Kingsguard and rips up the scroll that holds Robert’s last wishes and demands that Ned bend a knee to Joffrey. Finally Ned spills the beans about Joffrey, and just when I smell a massive coup for Ned here comes the big doublecross. Ned thinks the Gold Cloaks are with him and he orders Cersei’s guards to surrender so there is no bloodshed. And just when you think all’s well that ends well, Littlefinger betrays Ned, and holding a dagger to Ned’s throat hisses that he warned Ned not to trust him.

Favorite quote of the Night…

“I always wanted to be a wizard.” ~ Samwell Tarly

Well, I only see this going one way. Ned in the dungeon and the Starks in big trouble. At this point, maybe Khal Drogo crossing the ocean and coming for the throne is a good thing. I think the fact that Ned never wanted Dany dead in the first place will be a good thing for the Starks. Maybe Ned, who I think would make a great king BTW, will join with the last Targaryen in her bid for the throne once he’s sprung from the dungeon — because you know that’s where he’s headed and you know he will be sprung. And then there’s Stannis. What will he do? He’ll come to Ned’s aid too because of Ned’s letter upholding the succession.

Thank goodness for Ned’s honor. It will serve him well in the end, though at times it can be maddening, especially when it seems only the bad prosper because they are willing to do whatever it takes. Things are really heated now. Next week’s episode is going to be even more dire. It also looks like Ned may find an unexpected ally. (Did we judge Varys too harshly?)