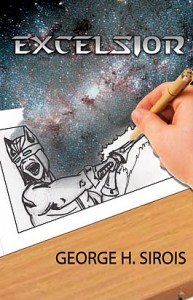 Can you believe it is already day 5 of the Indie Book Collective’s “Get Loaded” Blog Tour de Force event? Things are clipping right along at a smooth and wonderful pace, and the next stop on the tour is over at author George H. Sirois‘ blog to take a look at his fantabulous book Excelsior. So, without further ado, let’s take a peek inside book number 5 on the blog tour!

The story Excelsior took over 15 years to culminate. Most of that time was spent developing the main character. The actual writing of the manuscript didn’t commence until 2008! Within the pages of Excelsior we find a tale about a high school senior named Matthew Peters who has spent the last seven years creating the ultimate online comic hero by the name of Excelsior. Excelsior is the savior of a faraway planet named Denab IV. The character Excelsior and his online comic strip is becoming a phenom on the web, and Matthew should be enjoying his success, not discovering that his life is about to imitate his art! A beautiful woman shows up at his school and reveals that she is from Denab IV and that Excelsior is real! That the lifeforce of the hero Excelsior actually lives within Matthew! And if that isn’t enough to fathom, Matthew finds out that Excelsior’s enemies are gathering and it will be up to Matthew to become and embrace the hero that dwells within him. He must because the survival of two planets, both Denab IV and Earth, depend upon him. And here Matthew thought that Excelsior was just a comic hero from his imagination.

Put this book on your reading list as a Need to Read — stat!

You can follow George’s tweets @GeorgeHSirois on Twitter, and Like his novel Excelsior on Facebook. Remember to stop by George Sirois’ blog for some really cool ways to enter to win a free kindle and some other really cool swag!

Sign up for the Blog Tour de Force newsletter which will also give you some ways to enter the Kindle giveaway contest and be the first to get Scavenger Hunt clues!