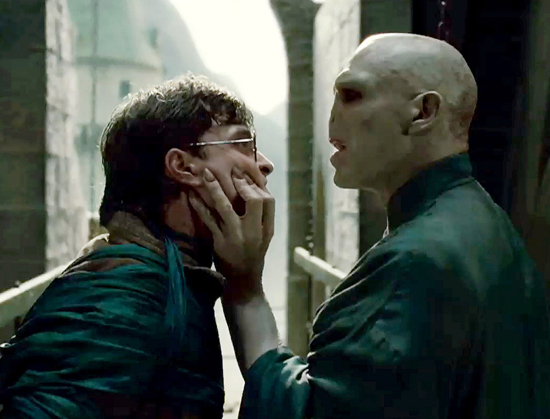 “The boy who lived come to die.”

I love everything that Harry Potter stands for — courage through adversity, finding the strength within, the power of love and the bonds of friendship, and faith, above all, faith that when the chips are really down, you’ll have the power to conquer any obstacle because of the faith you have in yourself. I did immensely savor this epic finale to a fantastical fantasy saga. The ending was poignant and hard earned by our beloved characters and it was a final installment filled with all the magic and adventure we love in our Harry Potter films. 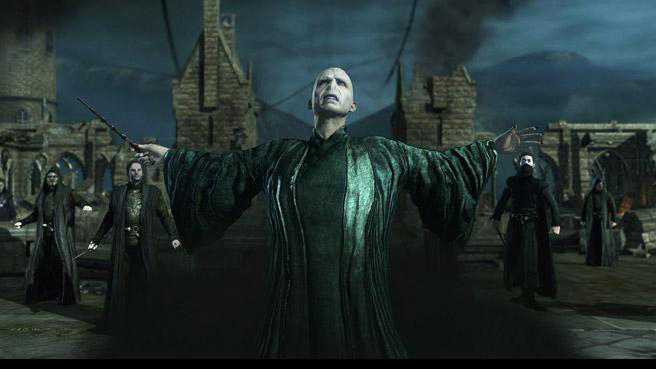 As part of a whole, and even separately, it does deliver most admirably. This film boasts a score filled with reminiscence of bygone adventures and David Yates and Steve Kloves do pay homage to the themes J.K. Rowling poured into this wonderful work of fiction. The CG was seamless, awe inspiring and masterful, and enhanced the story without overwhelming it. The writing of Steve Kloves was stark and to the point, and the action was fast paced and always moved towards the end with purpose, and without any lulls that allowed the mind to wander. And the end was tied up nice and tight and even had a bow on it, and the only thing left to our imaginations is what will life be like for our heroes now that the peril is over? It is a film that is almost perfect and brings to a bittersweet close an unforgettable adventure that spanned a decade. 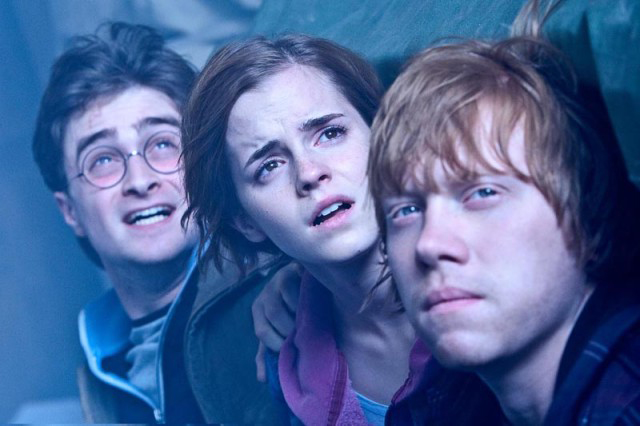 The opening scenes of Part 2 set up the calm before the storm and Harry (Daniel Radcliffe) and his faithful friends are regrouping before their final battle. Before long the audience is swooped up into another daring adventure as Harry, Hermione (Emma Watson) and Ron (Rupert Grint) search for the remaining Horcruxes. There is a sense of urgency that is magnificently conveyed as is the danger of this life and death quest. They’re not practicing spells at Hogwarts anymore. No, this is the real deal where one wrong move can end up costing the lives of those Harry loves.

The malevolence of Voldemort (Ralph Fiennes) and his horde of evil doers is fully realized and no longer reduced to shadows and whispers. His reign of fear and tyranny is in full swing and he is indeed terrifying to behold in all his glory. And yet for all this majestic evil unveiled, for the first time we can also marvel in the fact that Voldemort is not invincible and that Harry just might have a chance in defeating him. 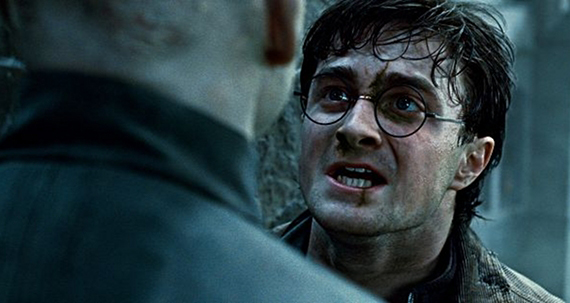 In Part 2 our characters are fully developed and both we and they know exactly who they are. They are also no longer children shouldering burdens that the young shouldn’t have to carry; now they are capable, adept and fierce wizards who have grown to adulthood under our ever watchful eyes and they are set to defend Hogwarts where they will have their last stand against Lord Voldemort. Even Hogwarts itself, a place that was once a hallowed, mysterious, kooky and off the wall place, is now a grim sentinel of all that is good in the world.

The most emotionally moving moment of the film comes when Severus Snape’s (Alan Rickman) true part in all of this is revealed. We have the good fortune of going back in time and delving into his most private memories and we see a man with a heart capable of a deep and abiding love and duty. He is a man who has been forced to become the villain. Where once you reviled him as a traitorous killer, you will ultimately see him as a man willing to take the fall and be the bad guy who will do what he must in order to give Harry and his friends a chance to succeed. More than any other character in the movie, he has been sorely misjudged by all and sundry — even Harry.

And Dumbledore (Michael Gambon), the man who seemed to be the magnetic north of these films, the compass by which Harry steered through a life fraught with danger, is a man whose nature is called into question. Were we wrong to trust him all along? Was he so devoted to prophecy and duty that he was the most duplicitous of anyone? Even at the end he is a wizard that will remain a true enigma.

Ultimately in this film the past 7 installments coalesce into one final swell, weaving every nuance and bit of story that we’ve experienced over the years into one whole. It is definitely one of the darkest of all the films with some disturbing and sinister moments and deaths. Yet the way they handled Harry’s questions about death and what is next after life was treated in such a beautiful and peaceful way that it was easy to accept the tranquility Harry felt about these themes and this thing we call life.

We see characters we hate finally get theirs (and we cheer about it), we see our favorite wizarding teachers finally show us what they’re made of, and it’s like a reunion of sorts as we get to see for a final time on the big screen characters we’ve come to know like friends. We even get a deeper understanding of the kind of wonderful people Harry’s parents were and the love they shared and had for Harry. 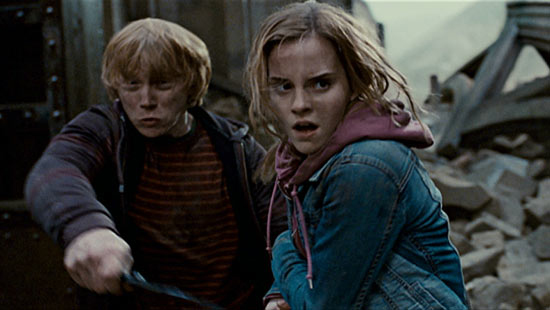 We see mild and sweet Mama Weasley (Julie Walters) lay it down in a “Nobody messes with my kids!” kind of fashion which is so utterly awesome; and Neville Longbottom (Matthew Lewis) becomes a gallant hero showing us the courage and bravery that lay all this while in his shy heart, and we can be happy for Luna Lovegood (Evanna Lynch). We finally see true love bloom and blossom between Harry’s best mates and comrades in arms, Hermione and Ron. It’s a love that beautifully culminates in a sudden unexpected, but long awaited kiss that has us laughing right along with Ron and Hermione with pure joy.

It’s also reconfirmed in our hearts why Harry is the Chosen One. His courageous and selfless heart reaffirms for us once again why we have loved this boy wizard from the moment we set eyes on him so many years ago. 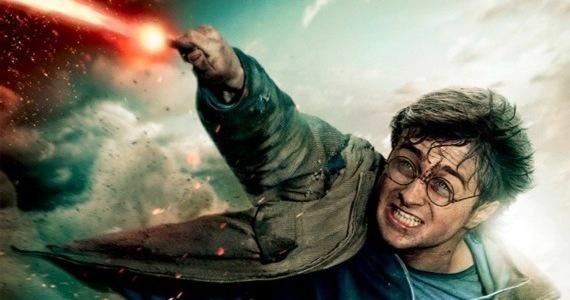 Unfortunately, the final battle is shocking in its brevity. Being that this is the moment we’ve been waiting for for 10 years — the final epic showdown between two of the most powerful wizards in the land, the different sides of the same coin — audiences may feel that it should have been more spectacular and filled with such an unbearable tension that by the end of the battle you were weak with relief that it was over. Instead Voldemort is vanquished in a way that seems almost too easy and it’s over before it really started. And moments before, even the death of his terrifying pet snake seemed too easy and slightly discordant, though it did afford Neville the chance to shine. 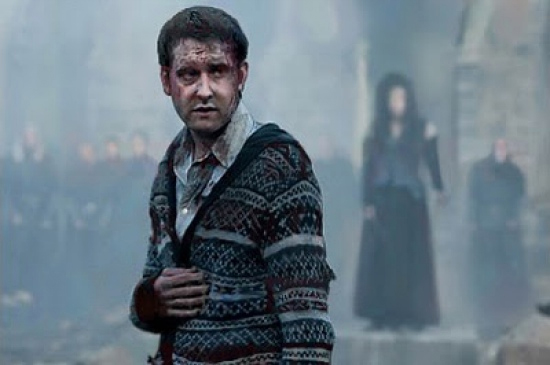 And the final scene, well, I won’t expand too much on it, but I find it ironic that in a franchise spanning a decade that was all about the most outlandish magic, magical places and mythical creatures, it was here in these final moments where I was most unwilling to suspend my disbelief. Is it because I’m just too sad to see the end of a 10 year story that will live in my heart forever? Or is it because I wish this film would have been a little longer and a little less frantically paced? Or is it because I fear Harry and his crew are now destined for a normal life of ordinary? 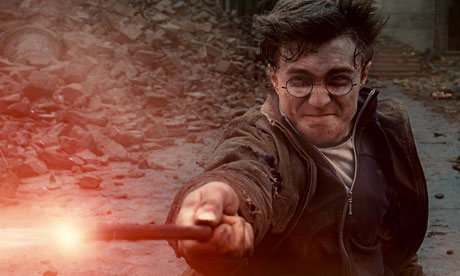 It’s the end of an era in film history and yet I do not feel that absolution of spirit that I quested towards for all these years. I left the theater feeling like something was missing; like I was missing that ultimate feeling of overwhelming satisfaction that settles into you after bidding farewell to well loved characters and a beloved story. I was close to it, but mostly I’m just left feeling sad. Afterall I have invested 10 years of my life in this franchise and 10 years of intense emotion.

I know beyond the shadow of a doubt that the saga of Harry Potter is one in a million and we may never see the likes of it again. And despite the feeling of sadness I am left with, I know that in the end, things ended the way they needed to end for Harry, Hermione and Ron. As far as endings go, I do think that this film was almost perfect. I’m also left thinking about the saying, if you love something, let it go. And though letting go is hard to do, it is indeed time to say goodbye to Harry Potter, the boy who lived.