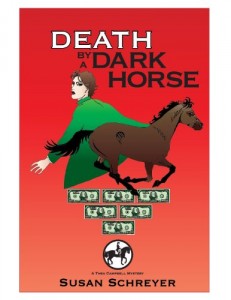 Death By a Dark Horse by Susan Schreyer

It’s Saturday, which means we’ve  arrived at the last day of the amazing Indie Book Collective event “Get Loaded” (your Kindle that is!) Blog Tour de Force blog tour, and what a spectacular 12 days it has been! The last stop on the tour is over at the blog of Susan Schreyer, author of Death By a Dark Horse. It’s the final stop on the tour, and if you have been diligently following along, there is a darn good chance you may receive some just rewards!

Death By a Dark Horse is the debut novel of author Susan Schreyer. It has a few of the things I just happen to adore: horses, mystery, intrigue, suspense and a little bit of danger, with a dash of romance and a pinch of the paranormal. Sounds like a recipe for a good read if you ask me. Read on for the editorial details!

“Thea Campbell goes out for revenge when the one person who is simultaneously the most likely and least likely candidate for thief steals her horse. But Olympic hopeful Valerie Parsons is past caring about being arrested. She’s dead. At first Thea’s horse is assumed to have killed the woman, but when the coroner determines it was a human hand and not a horse’s hoof that ended Valerie’s life Thea becomes a person of interest. Now intimidating people with little regard for due process are showing up on her doorstep looking to even the score. Toss in her wrecked love life, a sexy geology professor who stirs up more than dust, and an alleged psychic horse, and it soon becomes apparent that Thea’s predictable life is now out of control. As she takes charge of clearing herself of the murder she discovers the victim had a knack for making enemies—one of whom is Thea’s ditsy sister. She pursues her investigation with more at stake than ever, and in a seedy biker bar comes face-to-tattoo with information that will lead the police to the real killer. She dutifully reports to the detective in charge. But Thea is wrong. As close to dead wrong as she ever wishes to get.”

Want to know what readers are saying about Death By a Dark Horse? Follow the link!

Ahh, horses, romance, mystery; what more could you ask for? Want to read a cool Q & A sesh with author Susan Schreyer? Visit Mark of the Stars!

Check out Death By a Dark Horse by Susan Schreyer on Goodreads, and you can follow @susanschreyer on Twitter. Make sure to stop by her author blog for Blog Tour de Force goodies too!

Remember to sign up for the Blog Tour de Force newsletter which will also give you some ways to enter the Kindle giveaway contest and be the first to get Scavenger Hunt clues!