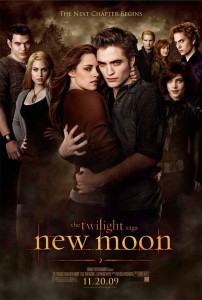 This movie is not a disappointment and I thoroughly enjoyed it. That being said, unless you GET the books and loved them, meaning — you are just one of the millions of salivating and swooning Twilight fans — you may not be down with the darkly agonizing tone of New Moon, its length, or its drawn out two thirds, then fast and furious end. I watched the film with a more mature audience (though I may have felt right at home amongst a gaggle of salivating, swooning, squealing teenagers since I was completely indulging my own inner teenager — which is something I love to do, I might add! 😉 ), so I found the other movie goers a jaded lot who laughed at inopportune moments. ie. intense emotional sequences and a glimpse of Bella’s highly anticipated fanged future.

The film opens with Bella in the idyllic mountain clearing with Edward, staring across the divide at an aged woman she thinks is her grandmother. But lo, it is Bella herself, wrinkled and old, while beside her Edward is still, as always heartbreakingly beautiful and murmuring, “Happy Birthday, Bella.” You can imagine Bella’s horror, and she does indeed awaken from her nightmare to her dreaded birthday.

Now, we’ve all seen the birthday bash disaster scene and we know Edward is going to crush her heart when he oh, so very coldly breaks up with her, and he and his entire family leave Forks. I was left cold, and Kristen Stewart actually looks like she is going to quite literally die from a broken heart and lack of oxygen. And despite my best, stoic efforts not to shed a tear, Edward’s leave taking undid me somewhat, because I, like so many other fans, have read the book and I know what’s coming. Chris Weitz shows Bella’s descent into the dark abyss of depression with a slow spinning of the camera which mirrors Bella’s downward spiral, and will leave you feeling a wee bit off kilter. 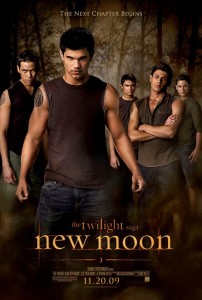 Enter Jacob, Bella’s own personal sun, who really does brighten the mood of the film and even Bella’s devastated heart to a certain degree. Jacob is tolerant of Bella’s budding kamikaze ways— the only way she knows how to trigger visions of her beloved Edward — repairing dirt bikes and reveling in the time he gets to spend with her, determined to show Bella that he can make her forget about him. But it is time that is short lived as Jacob’s happy disposition is taken over by loyalty to and the responsibilities of the pack, and he, too, leaves Bella in his desire to protect her. Yet he, unlike Edward, can’t stay away from Bella, and luckily for her, Jacob’s around to save her from a disastrous cliff dive into frigid waters.

But really, between lurking Laurent who’s off his animal diet, vicious Victoria who has a score to settle, and Bella’s knack for endangering herself, how can any of these suitors think Bella will be safe alone? It isn’t long before Bella knows the whole truth, that vampires and werewolves are not a thing of myth and legend. They exist, and Bella realizes she can’t live without either of them, but she must make a choice because lines have been drawn.

After Bella’s near fatal cliff dive, a near encounter with Victoria in the turbulent waters of the ocean, and a nick of time rescue by Jacob, Alice shows up unexpectedly at Bella’s house, much to Jacob’s disgust. After getting in a bit of a spat with Alice, Jacob shares a moment with Bella, which nearly ends in a kiss (that unlike the book, never happens on screen, which is a bit of a disappointment), but is disrupted by a phone call from Edward. That fateful call is what revs up the action of the film, sending Alice and Bella to Italy on a desperate race against time to save Edward from destroying himself, because he thinks Bella is dead and he can’t live in a world where she doesn’t exist. 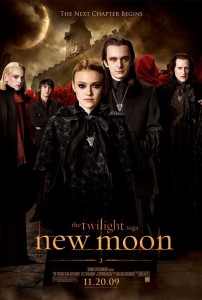 Bella and Edward’s reunion is everything one could have ever hoped for and cements the realization that these two are hopelessly inlove, and refuse to live without each other. But their heart stopping reunion is regrettably brief, though intense, and enter the Volturi. The Volturi are convincingly and satisfyingly corrupt. Michael Sheen‘s Aro is decadent and chilling, Jane is played to perfection by Dakota Fanning, and Aro’s cat and mouse games effectively put the fear of God in you if the rest of the Volturi henchman do not. Top it off with an awesome fight sequence in the Volturi audience room between Edward and Felix, and Bella’s heroism and selfless love for Edward, and there you have it! And of course we know that love conquers all…for now.

New Moon is peppered with shirtless werewolves, a shirtless Edward (I had to mention this to get it out of my system!), werewolf fights and chases, humor and struggle. It is a movie about love, loss, tough choices, pain and unrequited love. It’s as different from Twilight as werewolves are from vampires, but no less filled with longing and conflict. It stays as true to the book as it can, and I must admit you really have to read the books to truly understand and enjoy the movie. I think Twilight fans fell inlove with the novels, inlove with the story, with Edward, Bella and Jacob — all secretly dreaming that someday they would see the world of Twilight on film. That’s it. Dream come true. So I give New Moon a thumbs up because I loved the books, I loved the characters, and I love literature that moves me (and my inner teenager) on film. 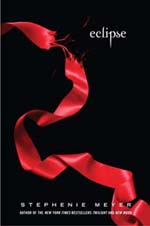 New Moon is a movie breaking box office records already, yet is getting mixed reviews from critics who just need to remember, this isn’t a movie meant to stand alone. It is just the second part of a beautiful and unforgettable love story.

The Twilight Saga will continue with Eclipse in June 2010. Let the countdown begin!