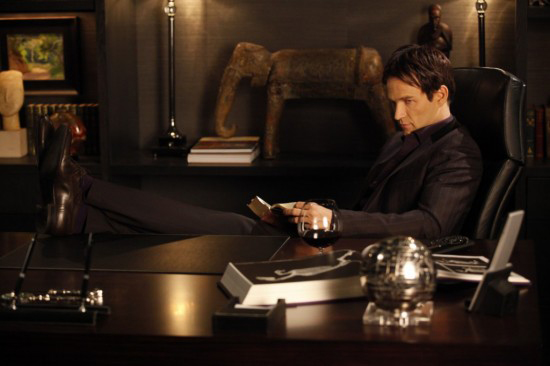 I’ve often wondered what it would be like to have a random conversation with one of the True Blood characters. I’m sure it would be thrilling considering that they are either vampires or one of the other supernatural creatures of legend and mythology. It can probably also be a tad bit dangerous. So, if I had a chat with Bill Compton, this is probably how it would go down.

Me: Now this is something I have always wanted to ask a vampire. Do you think you’d ever participate in a Polar Bear Swim on New Year’s if it was held at night?

King Bill: …that is not something I choose to participate in.

Me: Moving on then. What is your solution for Pam’s situation?

King Bill: Unfortunately my hands are tied at the moment. In the meantime, maybe there is a…a cosmetic solution. Maybe some extra lipstick.

Me: Yeah, I don’t think that is going to work out. Funny how dudes think a little extra lipstick can solve everything.

Me: *I clear my throat.* If you had an opportunity to be the New Old Spice Guy, what would your opening catchphrase be since you couldn’t use “Hello ladies”?

King Bill: You are in a locked room with no means of escape…

Me: Yeah, I don’t think that would go over too well with marketing. Let’s move on. So it seems to me that Eric Northman has a knack of pissing you off.

King Bill: Yes, he does that.

Me: *I get the feeling he doesn’t want to talk about Eric so I switch gears.* Everyone has been talking about whether or not J.K. Rowling will or will not be writing anymore Harry Potter books. She says not. What do you think?

King Bill: I will glamour her to be certain.

Me: You seem to be fond of doing that. *I look away a little flustered and ask the first absurd question that comes to mind in an attempt to distract Vampire Bill.* So, what do you think about bull fighters and rodeo clowns?

Me: *Relieved there won’t be any glamouring this evening, I carry on.* Do you have any advice for aspiring writers, screenwriters and filmmakers?

Me: So this whole witch thing is pretty crazy, huh? *This is a gamble. I’m aware he doesn’t want to talk about the witches or about Eric. I laugh nervously to ease the tension.*

King Bill: You think witches are to be laughed at? *Bill looks extremely menacing suddenly.*

Me: *I brazen it out.* No quite the contrary. I take this very seriously. As do you I presume?

King Bill: *With a considering look, Bill decides to answer me. I sigh imperceptibly.* Vampires have often found it advantageous to maintain a hidden presence in humanity’s most powerful institutions. And in the 1600’s that was the Catholic Church. And today, as you all know, it’s Google and Fox News.

Me: Thank you for such a gracious answer, Your Majesty. Now I know you don’t like to discuss him, but my readers expect me to ask the hard questions. The last time I saw Eric Northman —

King Bill: *An angry and shocked expression comes over King Bill’s pale face and he rushes over to me. He is very angry and very menacing now. I cover my throat and hope for the best.* …You can kiss Eric Northman goodbye. You’ve seen him! Where is he? 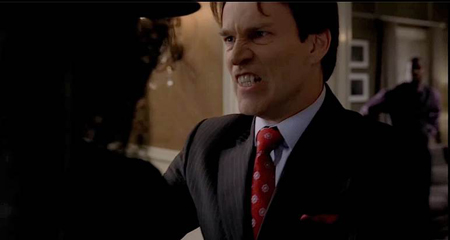 Me: *I try to keep my composure.* Gee, you sure get upset whenever someone mentions Eric —

King Bill: *King Bill’s fangs pop out.* Do not lie to me.

King Bill: Where is he?

Me: *My voice comes out in a squeak since King Bill and I are now nose to nose and his fangs seem very large and pointy up close.* At Sookie’s…

King Bill: *Bill retracts his fangs with a snap and he looks crushed. His voice is pained when he speaks.* Sookie’s?

Before I can answer, Bill whooshes away with his vampire speed, and that effectively concludes our brief and random conversation with Bill Compton, Vampire King of Louisiana. It is very clear to me that the mere mention of Eric’s name in the same sentence as Sookie’s will elicit a heated reaction.

It is also my guess that he is headed straight over to Sookie’s and she has got some explaining to do, and Eric is in big, big trouble.

I can’t wait to see what happens on tonight’s episode. Can you? 😀