Home Books On Film TrueBlood “I Got a Right to Sing the Blues” : You Sure Do!

TrueBlood “I Got a Right to Sing the Blues” : You Sure Do! 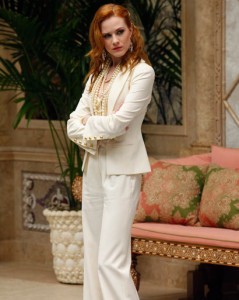 OK, so I’m sure you already know this season of TrueBlood is a no holds barred kind of season. Tonight’s episode was crazy. Sookie is Russell’s prisoner and gets no help from Eric as he has his own agenda. Bill has betrayed the king and proven unworthy of trust. To make matters worse, not only did Bill manage to stake and kill one of Russell’s guards, he also had the audacity to attack the king. Russell, who has about 3000 years on Bill, shakes off Bill’s attack like he would a mosquito and sentences Bill to death. In a nifty twist of “do it because I’m the king and I say so!” power tripping, Russell orders Lorena to carry out the order of execution. As guessed, Sookie pleads for Bill’s life during a session of quid pro quo with the vampire king himself. Two questions for two questions, Russell asking about Sookie and her abilities, and Sookie asking pleading with Russell to spare Bill’s life. Oh, and before I forget, Sookie also manages to burrow deeper under Lorena’s skin by threatening irreversible bodily harm to the she vamp if she so much as harms a hair on Bill’s cold head.

So, Franklin tells Tara Sookie’s in the house, and Tara decides that if they are going to get the hell out of there it’s up to her to save both herself and Sookie. Tara easily manipulates the hapless Franklin, so convinced is he by Tara’s acting that Tara is actually into him and into becoming his undead bride. Not digging the champagne colored satin PJ’s, Franklin, BTW. So, Tara successfully carries out her seduction and quite literally takes a bite out of Franklin, who is extremely into it. 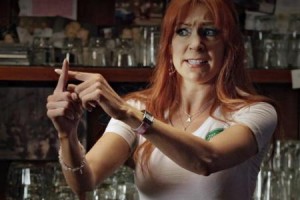 Arlene_Stay away from me I take garlic!

Back in Bon Temps, Jessica is trying to makes friends with Arlene while taking a bite out of a lingering and rudely demanding patron due to extreme hunger. When Arlene cuts her finger while cutting a lemon for said lingering patron, Jessica’s fangs pop out. This freaks out Arlene so much that she hilariously makes the sign of the cross with her fingers, holding them out infront of her like a talisman, to ward off Jessica in case she tries anything fangy. She also warns baby vamp J that she’s wearing a silver necklace and takes garlic supplements to boot. In her panic to save herself from becoming dinner, Arlene blurts out that she’s pregnant. “….and that probably makes you want to eat me all the more.” Oh, Arlene.

Tommy refuses to tell Sam anything about the real deal about what’s going on with Joe Lee, and Mama Mickens arrives bearing a gift of corn fritters fried in bacon grease. MMM! Artery clogging goodness! What is that saying about beware of strangers bearing gifts? I mean realistically, Melinda Mickens is practically a stranger to Sam despite the fact that she is his mom. Later that day when Tommy is a no show at Merlotte’s, Sam calls Andy (BT’s new acting sheriff) over to grill him on info about the possibility of an illegal dog fighting ring in the vicinity. Getting what he needs out of Andy, Sam takes off like a dog hot on the trail of his quarry to rescue Tommy from his greedy and immoral parents, and the danger of the ring.

We first see Jason and Crystal still canoodling by the water’s edge when suddenly Crystal lifts her nose and she sniffs the air like an animal with a keen sense of smell would. Before Jason knows what’s happening, Crystal is gone like a specter in the night. The next day,  Jason shows up at Crystal’s door bearing a bouquet of courting flowers only to be shot down by Crystal and Crystal’s fiancee, and told to get lost if he knows what’s good for him. News of a fiancee was news to Jason, alright. In fact, it took him a minute or two to catch on that Crystal was acting like she didn’t even know him. Ego bruised and tail tucked between his legs, Jason retreats, boggled and embarrassed and itching for a fight. Arriving at Merlotte’s ostensibly to drown his sorrows, he nearly gets in a parking lot fender bender with Sam as Sam is high tailing it to Tommy’s rescue. Full of vitriol, Jason confronts the cocky young quarterback of the year from last week — with an ill timed smack on the bare rump, a parody on the friendly football player butt smack between team mates — while said QB is getting busy with his girlfriend in the backseat of his car. Jason threatens him, and we all know that this isn’t the last we’ve seen of this younger 2.0 version of Jason Stackhouse.

Things are going just swimmingly for Lafayette and Jesus, very swimmingly, and after a long day spent at Merlotte’s, the pair end up at Lafayette’s house. Jesus is admiring the bric a brac of Lafayette’s mantle when a smashing of glass is heard outside the house. Both rush out to find 3 of the thugs Eric convinced to sell Lafayette’s V playing a game of smash the glass with a bat on Lafayette’s new car. Lafayette goes head on into the fray and Jesus goes round back and wrestles the bat away from the offenders. Lafayette starts pummeling one of the offenders and the other two take off. Lucky for the vandal getting beats by Lafayette, Jesus intervenes, pulling Lafayette off the guy. Jesus warns Lafayette about giving in to the dark energy, and in the next breath asks Lafayette if he is a drug dealer. Quicker than you can say lickity split, Jesus checks out of the budding relationship and demands Lafayette take him home, wanting no part of Lafayette and his nefarious activities.

Back in Russell Edgington’s kingdom, an escape and rescue attempt is in the works. Tara has waited until Franklin has fallen into the sleep of the dead after a night of torrid and violent passion to escape. Before locating her clothes, Tara takes up a mace from the collection of medieval weapons on display on their bedroom wall and smashes Franklin’s head like a pumpkin, and dashes out of the room to find Sookie. Tara manages to convince the were guard stationed outside Sookie’s room to let her in to feed Sookie some almonds as per Talbot’s request. How does she convince him, you ask? You see, Tara tells him Talbot wants to serve Sookie for dinner, hence the almonds, and if Sookie doesn’t get the almonds, Russell will cut off the guard’s and his pack’s supply of V. Simple. So in goes Tara, exclaiming that the guard has let Sookie escape because he fell asleep. So in goes the guard, who then gets jumped and beat up by the two gals, hit on the head by the bowl of almonds and whatever decorative item Sookie’s holding, and is knocked out cold. Out goes Sookie and Tara, running hell bent for leather for their freedom.

But of course, we know Sookie ain’t leaving without her beloved Bill. Who BTW, has been restrained with silver chains in a brick building a.k.a. the slave quarters, and has been tortured and drained to the point of death by Lorena. To add insult to injury, given the go ahead by Lorena, Cooter and Debbie have binged on Bill’s blood, and they are just ecstatic to be drinking right from the source. All the while Lorena stood back watching and crying the blues, her face stained with blood tears. When Cooter and Debbie leave the building, Sookie goes in to kneel at Bill’s side looking for signs of life, when out from the shadows pops Lorena. Lorena launches Sookie at a wall and lunges at her. The last time we see Sookie, Lorena is taking a bite out of her while Sookie screams for her life at the top of her lungs. And we all know that Lorena at her throat does not bode well for Sookie. Will Lorena make good on her threat and end up wearing Sookie’s ribcage as a hat?

Maybe not, but who’s gonna save Sookie now since Eric has let her down and Bill is incapacitated at the moment? Well Alcide, of course, who runs into Tara outside on Russell’s property, first as a white wolf, then in his altogether. I was wondering where he was.

In amongst all this excitement, Talbot fumed about the damages to his house and fumed about the fact that Russell never takes him anywhere, and Jessica has been glamoring people. Bill shares a tender and illuminating moment with Lorena, and Russell loses his temper a few times. Russell and Eric drive to the Queen’s place to pay her an unannounced visit. While there, after killing her guards, Russell proposes marriage to her —again, and Eric gives Queen Sophie Anne a literal smack down for trying to frame him, threatening to tear off her head and throw it in the pool.  Once the Queen grudgingly agrees to Russell’s proposal, Eric sweeps her off her feet and carries her away to restrain her. Sophie Anne, spoiled royal that she is, wails for her human Hadley, who just happens to be Sookie’s cousin, remember?

We can’t help but hope that Eric’s refusal to help Sookie is all a part of his grand scheme, because he seems pretty immune to Sookie’s pleas, nevermind Bill’s. We’re left anxious still about Pam, praying that she isn’t doomed — though I have a sneaking suspicion that the Magistrate’s days may be numbered. I feel like despite his seeming control and unmatched power, Russell’s days may be numbered as well. Eric may be the cause of his demise, despite the fact that Northman seems to be doing quite a bang up job of convincing Russell that he’s all his in more ways than one, as well as a loyal subject. Speaking about sneaking suspicion, did I mention that Eric is convinced that it is Russell that killed his family all those centuries ago?

Good times. Here’s a sneak peek at next week, compliments of TrueBlood’s Nest.

~P.S.~ Now I am definitely going to read the books by Charlaine Harris. I’m really wondering if the show is going to follow Eric and Sookie’s storyline, although at this point, I don’t see how that is possible.