Home Be Curious TrueBlood Thoughts: It’s All About Eric

TrueBlood Thoughts: It’s All About Eric 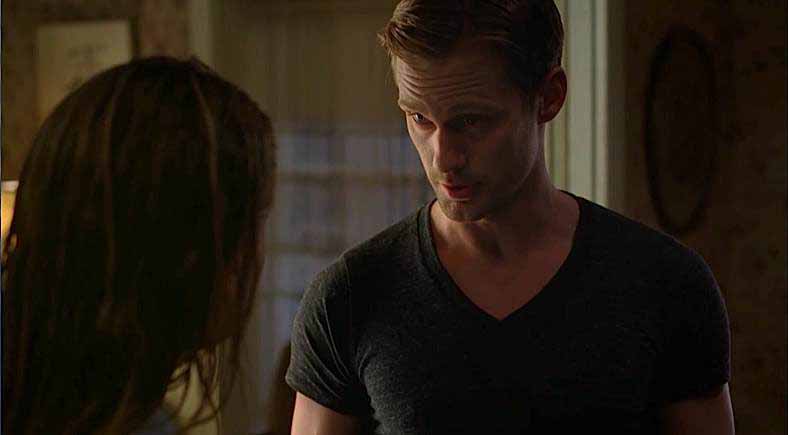 Even though I am excruciatingly excited about Eric and Sookie finally getting together, I also feel an immense sense of apprehension because this is TrueBlood and I just know that things are going to get messed up. Season 4 is season of the witch and things never stay even keel for long in Bon Temps. But that’s what we constantly and eagerly tune in for, isn’t it? It’s all the wonderful, fang filled drama that keeps our hearts pounding for more. 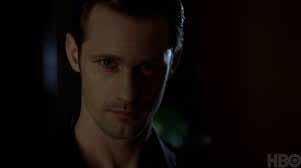 Eric has been a favorite of mine since the beginning of the show. It’s more than his towering Viking good looks, or his swagger, his charm, his voice, or his bad boy exterior that hides a heart that figuratively beats strong and deep with intense emotion. The thing that has me truly engaged is his character’s ruthless intensity, deliberate machinations, his significant resoluteness, confident determination, and his capacity to endure waiting. Anyone with eyes in their head can see that he has had his own vampire eyes fixed on Sookie for a very long, long time. I think one of my favorite parts from last week was in the beginning when the moment Sookie touched down on the Earthly plane, Eric was awakened from his daytime slumber. He felt her presence, a presence he had been waiting for, an existence he never gave up on when everyone else did — even Bill.

There was something about that blind faith that speaks volumes about who he is. Something that viewers can’t fail but be roused by in some intangible yet indelible way.

Yet as invincible and powerful as he seems, this season he will become vulnerable in a way we haven’t seen him before, a way that will add the name Eric Northman to the archives of the most perpetual, compelling and prodigious vampires in vampire mythology if my instincts are correct. (Which means we’ll be 80, watching E!’s Top 10 Vampires of All Time and Eric Northman will be on that list.)

And for those of us who don’t have access to HBOGO (when is it coming to Canada? Anyone who knows, PLEASE let us know!) The preview for “You Smell Like Dinner” definitely gets the blood going. What is in the cards for our favorite vampire Norseman?

This sneak peek at Eric making Sookie an offer was too delicious to keep to myself. What would you do if the the most feared, cunning and intimidating and ruthless vampire in town offered you protection? Would you accept first and think about the price and consequences later?

And I ask again, is it just me, or does Katie look familiar? Check out this little bite of TrueBlood when Sookie comes to realize just who Bill is.

After this, Bill will definitely leave an even worse taste in Sookie’s mouth and Eric just might begin to look appealing to her. 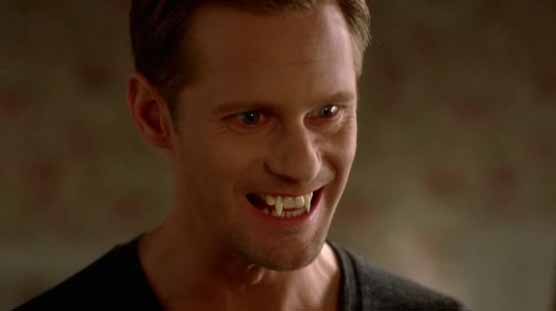 Favorite quote of episode 1 is just before Eric drops fang. "Sookie. You. Are. Mine." Talk about sure of himself.

Eric loves/enjoys/is entranced by the faery side of Sookie, and I have to admit, I enjoy it too. (Remember when she dumped Talbot’s remains down the Fangtasia garburator as Russell howled in agony and she laughed with faery glee? Total faery behavior there, friends!) We see it peeking out at us every now and again and there is something so fun about that side of her that seems like a complete match for Eric, doesn’t it? He’s sensed it all along, which is why he’s always been so intrigued by her. Now he knows why. Hence his comment, “Your blood tastes like freedom… like sunshine…and though they may not know it yet, that is what vampires smell when they smell you.”

But what plans does he have for Sookie? If you haven’t read the books, you’ll have to wait and see since only time will tell. And if you have read the books, this show is bound to keep you guessing since Alan Ball has said he’s using them as a guideline and not verbatim et litteratim. This is going to be the best season yet!

Aren’t you curious about what’s in store for Eric this season too? What do you think is going to happen to him? Do you think you’ll like the “new” Eric better than the “old” Eric? Aren’t you so curious and excited that you can hardly stand it? Get a fix for your #tbwithdrawal on Sunday at 8pm PST. Get hooked.