Home Be Curious TrueBlood “You Smell Like Dinner” Review Page 1

****DIVERT YOUR EYES AND COME BACK LATER IF YOU HAVEN’T WATCHED THIS LATEST EPISODE OF TRUEBLOOD BECAUSE THIS REVIEW IS CHOCK FULL OF SPOILERS!!!! BUT MAKE SURE TO COME BACK AFTER YOU’VE WATCHED IT AND TELL US YOUR TRUEBLOOD THOUGHTS!!!!**** 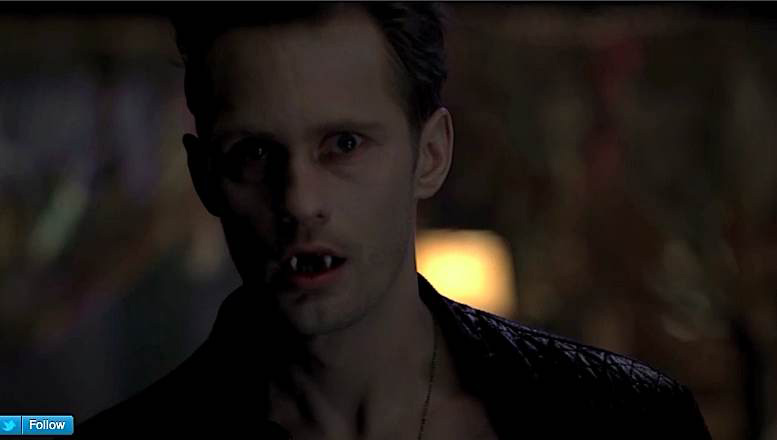 Eric is horribly bespelled by Marnie the necromancer. Oh nooooo!

Holy Wiccan! Hold on to your fangs because this episode is bound to blow you away!

Season 4 of TrueBlood is like a thoroughbred bursting out of the gates at Santa Anita on race day! This episode was full of big, big moments! Reunions, meetings and big, big, big time spells! We’ve all feared for Eric before, but it was nothing like tonight. I’ve never seen Eric uncertain and backing down from a fight — let alone fleeing! No matter the odds he stands and faces it head on! Remember his showdown with Russell in that gallery? And you never expect to fear for him if he was outnumbered. But tonight, it became very evident in a most definitive way that the witches hold sway in Bon Temps now. And is Eric’s new demeanor more of a lover and not a fighter unless provoked? Like a Ferdinand type vampire? Or is he just bewildered still by having a spell cast on him? It seems to me Sookie will have her work cut out for her this season, because even though she seems diminutive and in need of protection, Sookie has true magic in her veins, and even the most powerful of witches won’t be a match for someone who is touched by true fey grace.

Jason wakes up to see Becky staring at him and Timbo is licking his bloodied head since there seems to be a lack of bandaids in Hotshot. Jason asks them who put them up to taking him prisoner.What I want to know is if a search party will go out for him once people figure out that he’s missing? Or will people think he’s playing hookie and back to being the old Jason and not worry too much?

Anyway, Jason asks Timbo and Becky why they’re doing this to him when he loves him? And he knows they love him otherwise Timbo wouldn’t be licking his head! He convinces them to release him and all seems to be going according to plan when crazy Felton suddenly busts into the room brandishing a shotgun, and you know he’s all hopped up on V!

Isn’t it ironic that V seems to cause Jason all kinds of trouble even when he’s not doing it himself? It seems to be the cause for all his troubles come to think of it…

Jason tells him off in no uncertain terms (that’s his faery blood talking!), I mean him and Felton have never been friends and Jason had to know that it was Felton who is responsible for his abduction. Felton ends up pointing the end of shotgun barrel right up under Jason’s nose.

Like we’ve seen in my previous post, Sookie rushes down her — or are they Eric’s? — stairs madder than a hatter that Eric has managed to gain the upper hand. We’re secretly gleeful, aren’t we? Eric follows and with vampire speed cuts her off before she can get to far. They go at it, Sookie denying her secret lust for him as usual, and Eric gloating just a little. It’s simply delicious, this little parley and it does get better.

“Your blood tastes like freedom… like sunshine…and though they may not know it yet, that is what vampires smell when they smell you.”

Now that we know just how irresistible Sookie is not just to Eric but to the entire vampire population and why, it makes sense that Eric would want to step in and offer his services. Which he does. In deliberate and charming Eric fashion, he offers Sookie his protection. I mean, what would you do if an attractive 1000 year old Viking vampire offered to protect you and sweetly asked you to be his, doing his utmost best to convince you? 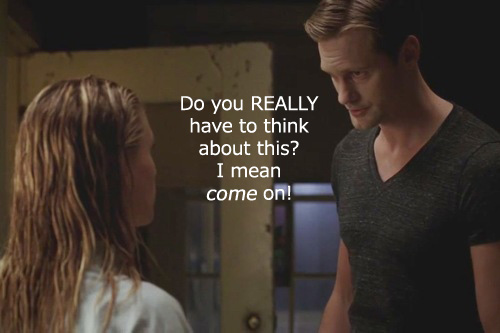