Home Be Curious TrueBlood “You Smell Like Dinner” Review Page 2 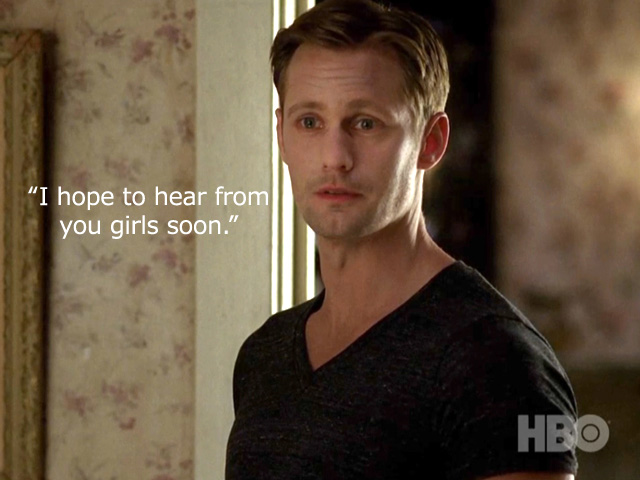 Of course Sookie refuses. Eric tells Sookie that he knows there are two Sookies. One who thinks she’s mere human and the faery Sookie. Eric admits to liking the faery Sookie better (so do I! Faery Sookie is more honest!) and advises Sookie to let the faery speak for her. Her fae side will keep her alive. He leaves with a tongue in cheek, “I hope to hear from you girls soon.” He also can’t resist taunting her about who owns the house once again, promising to have the screen door fixed.

Bill and Katie have much more than a business arrangement. Are you surprised? Now that she’s informed him of the necromancers he tells her that her job there is done. I think it’s pretty tricky of HBO to give us a gal that looked so much like Spohie Anne, don’t you? In the promo it looked like he was ordering Queen Sophie Anne around. Alas, as fun as that would have been, it was just the old Queen’s doppelganger.

Protestors have gathered outside Fangtasia shouting, “Steve Newlin was right, you’re devils of the night.” Hoyt confronts them, and it’s a scene that is pretty funny. He yells, “I’m a better Christian than you because I’ve got love in my heart…” accompanied by some great mime moments indicating all the love he has in his heart. Anyway, despite Hoyt defending her, it’s very clear Jessica has no problem standing up for herself. Before things go bad for human/vampire relations, Pam steps in and with perfect Pam candor says let them exercise their constitutional rights to be F-ing idiots. It’s the best of classic Pam. Love her. Yet when Hoyt gets caught up in a brawl, Pam stops Jessica from helping Hoyt since vampires getting caught on film in a physical altercation with humans would be bad. I’m sure it really did hurt Pam to see Hoyt get beat down. Yeah right!

Sam and Luna are chilling in their birthday sights under the moonlight after an exhilarating run. They’re flirting and Sam is having great success with his pick up lines. He’s trying to get her to open up, but Luna is reluctant, she’s also hesitant to kiss him for fear of getting close and she takes off running, literally. She shifts into a horse and gallops away into the night.

Just like we knew she would, Sookie goes to see Bill to help her with her Eric problem. She is surprised (in a good way) when she sees that his house has been beautifully restored. Meanwhile, Mr. Compton is in flagrante delicto with Katie, yet he still manages to sense Sookie’s presence and all his efforts cease and desist in mid — well, you get the idea. He gives the order to security to let Sookie pass and she glides into the house. She’s surprised again at the opulence on the inside as well and makes her way to Bill’s bedroom where she’s surprised again (in a bad way). It doesn’t take a genius to put two and two together when she sees Bill and Katie fixing their clothing. Bill introduces Katie as part of his security detail. Good one Bill, but there’s just no way to recover. 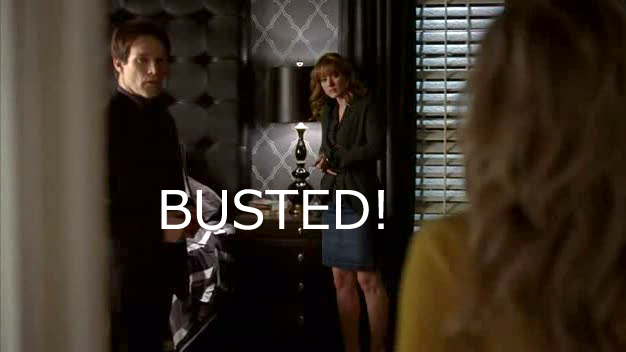 It’s nice to see Jesus and Lala happy within their bubble of domestic bliss. They’re discussing the bird coming back to life, good and bad magic and witches. Lala has some serious, well founded reservations about practicing magic. Jesus is still trying to convince Lala to embrace it. TRUST YOUR GUT, LALA! This is going to ruin their relationship when it all goes horribly wrong.

Sookie explains her Eric situation to Bill claiming she didn’t want to go to him, however, there’s nothing Bill can do really, unless he resorts to underhanded scheming which we all know he will. Legally he can’t make Eric give up his property so he advises Sookie to stay at another human’s house until he can figure something out.

Does Bill want to help Sookie. Of course he does. He wants her back and it’s obvious. Yet why does everything Bill does seem so underhanded? Sookie wonders out loud how Bill became king, but checks that thought because she knows she won’t be thrilled with his methods.

This induces Bill to reflect on his past so we go back to London 1982 and now all those promo scenes of Bill dressed up in goth sporting black eyeliner and a crazy hairdo make sense. Seeing Bill feeding so forcefully was a bit shocking (I don’t know why after all I know of him) but he still adheres to the credo of not killing humans. He does give some recovery advice which is humorous yet creepy. This is an honest version of Bill that we see here. The real Bill. We can see how Lorena was drawn to his nature. He restrains himself too much when he is with Sookie, trying to be something he’s not and not being true to his nature. 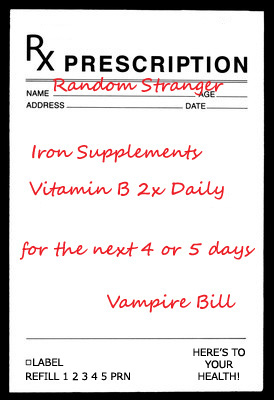 When Nan shows up we’re as shocked as Bill is. We learn she’s been watching Bill for weeks. She’s intrigued with the fact that Bill doesn’t kill his prey. We find out that Bill and Nan go way back and that Bill is a very skilful spy. He was a double agent for Nan and successfully infiltrated the monarchies and did the AVL’s dirty work to the tee. His agenda and that of the AVL aligned perfectly. I wonder what Nan will do when she finds out that Bill is protecting Sookie?

I thought it was brilliant when we found out that Louis Pasteur is a vampire and is responsible for creating TrueBlood. A brilliant piece of fiction, that, don’t you agree?