Home Be Curious Did You Know? Why Is There A Trojan Man Commercial During Raccoons?

Why Is There A Trojan Man Commercial During Raccoons?

DISCLAIMER! The following material is intended for a mature audience and may be offensive to younger and/or readers sensitive to frank speaking/writing. Reading discretion is advised!

Every once and while, I like to sit with my Youngling and watch Teletoon Retro. I greatly enjoy sharing with her the animations of my youth which brought great joy to me. They still do, and to see her laughing just as hard as I did waaaay back when I was Youngling myself, just shows me that these cartoons were really funny. Anyways, I digress.

On one such recent occasion (tonight, actually), a Trojan Man commercial appeared, to my great dismay. Completely chagrined and totally terrified that my curious and bright 5 year old might ask me, “Mama, what’s a condom?”, I reached over and grabbed her. I crushed her little head to my bosom, effectively cutting sound off to one ear, while one of my hands covered her other ear, and my other hand covered her eyes.

Now, this frantic move on my part to shield her usually elicits more curiosity than there was in the first place. Now she knows beyond the shadow of a doubt that there was something going on that I didn’t want her to see or hear. So now it would be her mission to figure it out by ferreting the info out of me with an endless round of questions, and the declaration that I promised to always tell her the truth! To which I would theoretically answer, “I don’t want to tell you right now. I will tell you when you are 14 or so.” 😐 This kind of I don’t want to tell you right now, I’ll tell you when you’re older answer, usually satisfies her. But if I do the dive and shield from all evils move, this answer won’t suffice, and she will be ever vigilant and more determined than ever to discover the truth. Why oh why is there a Trojan Man commercial on during Raccoons? And on a Sunday, no less!

Now, I’m fairly liberal, but even I draw the line at Trojan Man advertisements on a network devoted to cartoons! My 5 year old is already impressionable enough as it is. She’s constantly trying to convince me that I need the Ab Circle Pro to get the ‘sexy hips and thighs I’ve always wanted’. I don’t need her trying to convince me that I need Trojan Man condoms because ‘it feels like there’s nothing there!’. Oh, the horror!

I mean, I do plan to be open with her about topics like sex, drugs, and rock and roll when the time is right. However, in my estimation, there is nothing right about hearing the word condom uttered by a 5 year old; I don’t care how liberal of a parent you are. That being said, I have no problem answering certain questions she has. We have a pact between us where I have promised to always tell her the truth. And if I don’t want to or simply can’t tell her the truth, I’ve promised I will tell her exactly that. For the more, shall we say, embarrassing or delicate questions she presents me with, admittedly, I do break out into uncontrollable laughter. I’m not laughing at her, I am always quick to explain so as not to discourage her from coming to me with whatever she needs. I explain that it’s simply due to my own nervousness, shock, consternation, and embarrassment as the reason for my inappropriate giggling. That is usually followed by a heartfelt apology just to put her at ease and get a hold of myself. The things 5 year olds can ask you when you least expect it, but no one ever warned you about, are endless. And trust me, that is a whole other post altogether! Giggling is how I handle the shock. It could be worse.

Oh well, I guess it was after 8 o’clock, 😐 and shouldn’t Younglings be in bed by then? Most definitely, however, this is a long weekend here in Canada, so I’m letting her stay up a little later than usual. My bad, I guess. So, I suppose I will have to exercise my right to:

a) change the channel 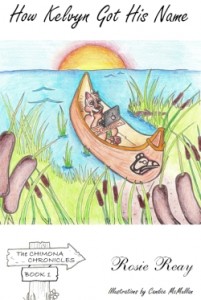 How Kelvyn Got His Name

b) turn off the TV and read How Kelvyn Got His Name to her, or

c) leap like a mad woman to shield my innocent child’s eyes and ears.

~P.S.~ Am I the only person on Earth not watching #Lost tonight? Thank goodness for DVD sets. No commercials!